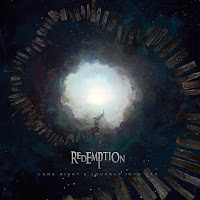 REDEMPTION
Long Day’s Journey Into Night
Metal Blade Records
Place of origin: Los Angeles, California, USA
Genre: Progressive/power metal
Produced by Jacob Hansen
Release date: July 27, 2018
The musicianship Redemption displays on Long Day’s Journey Into Night comes close to outstanding. If you liked Fates Warning in the 80s and listened to prog metal in the 90s and 2000s you should make a point of buying this when it’s released. You may even like it if you’re still a fan of 70s progressive rock. I’m a latecomer to the L.A. band (Redemption is their seventh album since their self-titled effort from 2003) and they include something for everybody with animated self-possession that rubs off on you instantly. It’s accessible without lapsing into saccharine sweetness, heavy without overwhelming listeners of 70s music, and progressive without pomposity. I hear a balance of these factors that sound perfected after a fifteen or sixteen year long process of developing, on a personal level as well as professional. There is a direct quality to the songs composed for this album, solidifying their influences and infusing them with vitality regardless of their length. The album is named after a semi-autobiographical play written by playwright Eugene O’Neill (1888-1953), full of drug addiction, self-blame and other horrors that admittedly doesn’t end well. Rather than reflect this, Redemption offer to shine some light on the anguish that characters of stage productions and real life suffer, suggesting that daybreak eventually arrives with perseverance. To a lesser degree, this somewhat represents the band’s determination to continue after the amiable departure of lead vocalist Ray Alder (Fates Warning) and the search for a new vocalist that ended with the band hiring Tom Englund (Evergrey). Redemption is not a preachfest or an exercise in “tough love,” but rather acknowledges and accepts the melancholy felt by those who suffered devastating losses in their time on earth. It reminds you you’re not alone, even if you have forgotten the dreams that kept you young inside. U2 fans will want to hear their cover of New Year’s Day as it does justice to the original and adds new dimensions to it. Look for guest appearances by Simone Mularoni (DGM/Empyrios), and Chris Poland (Megadeth, Lamb Of God). -Dave Wolff