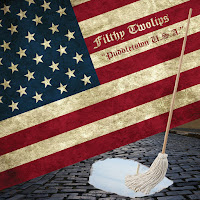 FILTHY TWOLIPS
Puddletown U.S.A. EP
Independent
Place of origin: Long Island, New York, USA
Genre: Punk
Recorded at The Oyster Ditch, Long Beach/Point Lookout, New York, USA
Recorded and mixed by Bootleg Gandhi
Guitar solos recorded in Houston, Texas, USA
Vocals on live demos recorded by McKlusky
Mastered by artificial intelligence at www.landr.com
Available at Itunes, Spotify, Amazon, Bandcamp, digital and limited edition CD formats
Release date: July 13, 2018
I was pleasantly surprised to learn punk was making a comeback on Long Island, and relieved to learn the comeback was something fleeting. So far it’s still underway, and as more LI bands surface and more bands travel from the city to the island to play, more clubs will hopefully become interested in booking more shows. Of course I am referring to punk that is bloody, sweaty and underground, as opposed to the screamo and pop punk we’ve heard on radio for a long time. I remember reviewing Filthy Twolips’ full length Complete Discography, a reissue of their debut EP and debut full length with bonus tracks, in 2016. Listening to it I heard they have more in common with bands that played the Sundance and Right Track Inn many years ago (you may have seen them when they joined Lynch Pigs and Murder Junkies in Bayshore in 2015. On their sixth and latest release, Puddletown U.S.A. EP they seem to have gotten even more bloody, sweaty and underground. It follows a cover of Misfits’ Some Kinda Hate released as a single this past February. The cover sounds closer to the original than it would have if recorded by a pop punk band. The guitars and bass have the attitude of the version the Misfits recorded for Static Age in ‘78, and the vocals capture the mood Glenn Danzig created. These releases are breaths of fresh air that came at the right time. Puddletown U.S.A. EP has that Long Island punk sound I remember from the old days, with some early California hardcore, NYHC and English Oi added. It’s extremely well rounded, and extremely brief with songs ranging from one to two minutes, so if you’re in a hurry you won’t spend a lot of time listening. The demo cuts are rawer than those recorded in the studio (even the acoustic version of The Children of Long Beach Don't Need Pornography/This XXX Movie is Not Pornography) and present a feeling of being there with the band while they practice. Do yourself a favor and support this band. -Dave Wolff