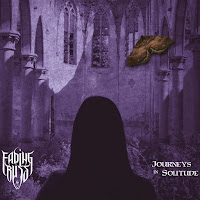 FADING BLISS
Journeys in Solitude
Malpermesita Records (France)
Place of origin: Liège, Belgium
Genre: Gothic doom metal
Release date: May 4th, 2018
Fading Bliss Facebook community page
Fading Bliss Reverbnation page
This album delivers something different in the world of doom metal that is not too common. Ethereal theatrics, operatic vocals, and clean production. This album, by Fading Bliss entitled "Journeys in Solitude" was released in May of 2018 and is on Bandcamp.
It offers four brutal yet magical doom metal oriented songs with a variety I have not seen since early Paramaciaum and Asunder. This band is from Belgium, home of many other great metal artists. Their band consists of five members. Their hometown is Liege.
The choir vocals are obviously from someone else other than the main singer which provides very deep growling menacing box whereas the other vocals that accompany most of the songs is very church like in its presentation. Very great vocals so just because I say church like does not necessarily make it a bad thing.
The tones of the guitars are crisp, slow and tuned low. The powerful song that is Ocean first swallows you in its vastness. Fading Bliss Mountain starts off slow with very great melodies. The choir vocals take over there on the most part. Forest and Desert is two very different tracks as well but still offer some similarities between them. Very Black Wreath sounding.
Overall the album has great structure, great vocals, guitars are very well done in the mix. The drums are done well but I wished they provided a stronger punch to them. A better mix down for the drums to be a bit louder in the mix would make the album nearly perfect. They also are a live outfit so I can imagine playing songs this long can take a toll on the body. The overall sound of this album is very reminiscent to me of Katatonia’s "Brave Murder Day" in some ways.
Anything else as far as keys and other electronic elements used throughout the album are well done as well. I really like how this album reminds me of an old doom metal favorite of mine, Exhumed from the Earth, by Paramaciaum, the sounds here offer something a bit different though which is very cool and not totally the same as past doom metal. I can see where the influences are drawn from though. The new sin is coming...
If I have to rate this album I give it a 7.5/10. Great band with a clear focus with awesome album artwork as well. This is one gothic doom metal band people should check out if you are very into this genre of music. Deep and very well thought out music with no lack of punishing riffs and melancholic bliss to be found right here. Absolute and Powerful.
You can find this album on Malpermesita records. Check it out! -Daniel M. Ryan