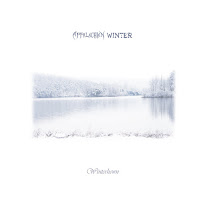 If they produced a (good) remake of Highlander and hired a black metal band to write the soundtrack, Appalachian Winter might be a worthy candidate. “Winterhewn” is that earnest and high-reaching, that it can enchant the viewer as he experiences the saga of ago-old immortal warriors from the ancient past to the present. For a U.S. black metal band Appalachian Winter has even built commercial potential since they began releasing a constant bombardment of full length albums in 2008. If they decided to go that route they could eventually realize prosperity aboveground without sacrificing a single iota of the connection to nature expressed in their musicianship. Their formula where they celebrate a time when the world is at rest, awaiting the rebirth of life brought by spring has worked for them consistently and they still manage to keep it invigorated and energizing. And all on the same scale as the epic movie I cited at the start of this review. Where Immortal’s portrayal of winter is an endless season of bleak, chaotic, storming frigidity and honors eternal devastating blizzards, Appalachian Winter defers to the exuberance buried under all the snow and ice stretching from horizon to horizon. This isn’t to say the imagery called forth on “Winterhewn” isn’t as harsh as the Norwegian band is capable of enumerating. From the silence of nature’s slumber emerges an almost unfathomable statement of the penetrating, numbing cold that does justice to any band from Norway, or Russia for that matter. For all is vast beauty this time of year, nature is equally unforgiving and deadly. The sun hides from its power, rain turns to ice, cuts flesh and draws blood, the coldness in the air freezes your blood, distant thunder grows increasingly louder to herald the demise of light. But this is a necessary aspect of the endless cycle of nature itself, and the sun must be forced into hiding so it can eventually return and turn death to life. Appalachian Winter make this point in the most anapestic and touching way as they establish winter’s time to purify all it holds dominion over. Something to remember is that the cover art is a complement to the musical and lyrical statement made on “Winterhewn”, seemingly personifying the antithesis of darkness in its personification of winter. –Dave Wolff
Lineup:
D.G. Klyne; Vocals, all instruments
Randy Smith; Guitars
Mike O'Brien; MIDI choirs
Track list:
1. Crystalline World
2. The Thunder of Distant Storms
3. Defy as Death Surrounds
4. Howls in the Wind
5. Ice Heart
6. Born of Winter
7. Forsake the Hope of Spring
Read Danny M. Ryan's interview with Appalachian Winter here. -DW
Posted by Dave Wolff at 9:39 PM