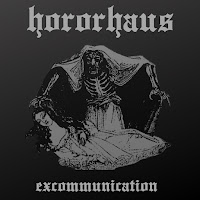 Project: hororhaus
Location: Woodstock, New York
Country: USA
Genre: Blackened hauntwave
EP: excommunication
Format: Compact disc, digital album
Label: transmigration records imprint
Release date: February 14, 2022
The solo project of Scott Harris, hororhaus, has been getting press in Asphyxium since the summer of 2020, thanks to his eclectic approach to gothic music and the legion of night creatures he's been presenting to you ever since he began recording this project. On his most recent EP, he shows there are more suites to visit in his haunted mansion, a place existing outside of time from Nosferatu to the Vincent Price era to True Blood and Twilight. The Monster Club is again open for business and accepting new members.
Even today, vampires remain firmly entrenched in pop culture, appearing in films, television, novels, and music. Each generation of horror fans finds fascination in mysterious folkloric creatures that feed on the mortal blood to survive. Occasionally, they sparkle, sometimes they reek of ancient crypts and rotting tombs. Harris brings the classic legend closer to home, sharing his impressions of what it's like to exist as a vampire, to exist outside the light and belong to the shadows. He might even give them a human quality we haven't seen before.
Harris’ extensive involvement in vampire lore, from Hammer horror cinema to Dark Shadows to Bram Stoker’s Dracula remains the inspiration for his songwriting and storytelling. It comes across more prominent than usual as it comes from such a deep seated and exclusive place. In his world there are no angels or demons, just endless darkness and the otherworldly beings occupying it. Approach them more closely and you may recognize something of them in yourself if you’re not careful.
The EP’s title, “excommunication” refers to outsiders and outcasts, as well as being rejected by the status quo or in this case the church. Isolation and loneliness that comes with exclusion. A number of noteworthy underground acts across a wide range of genres have explored this theme time and time again. It's explored just as convincingly in “excommunication”, but from a much more personal perspective, where little else is felt but grief and privation. In the midst of all of this comes a sense of togetherness that turns out to be even stronger.
This is the story of a Romanian mythological spirit known as a Strigoi, whose companion died unexpectedly before becoming a vampire. Through time and several reincarnations, they rediscover one another and embark on a long journey of transition, bloodlust, hunting mortals, dejection, derision for mankind, and especially romantic passion. The kind of sentimentality that can only be expressed by vampires who feel deeper than most humans do. With this piece, the storyline and soundscapes become one and you can visualize the journey the damned lovers take.
Harris' projects are do-it-yourself and difficult to locate without contact information. Artists typically pay this price for operating outside the norm. Whether you copy the Beatles or Metallica doesn't matter; people will take notice, but again, those bands were considered cutting edge when they began. Slasher Dave, keyboardist/vocalist for the American psychedelic death/doom metal band Acid Witch, mastered "excommunication" to improve the quality of Harris’ cutting edge work. You can tell there’s an improvement, so it appears to be a good choice. It has more depth and atmosphere to convey Harris’ fusion of horror soundtracks, goth, black metal, dark ambient, darkwave, synthwave and industrial.
Harris recommends listening to this EP with headphones so you can take everything in. Doing this would immerse you in the story more than you expected, to the point of getting to know our protagonists and experiencing what they experience with them. Without headphones this is an immersive experience if you have a decent set of speakers. From the introduction to the story that comes with “prelude” to the hypnotic repetition of “ghost host”, “evolution” and “eternal” to the Sisters Of Mercy/Joy Division-esque “bloodlust” to the rasping idiosyncrasy of “slayers” to the ritualized finale of “forever reign”, “excommunication” is a shadowy mosaic of sound and atmosphere marking the next step in the evolution of hororhaus. -Dave Wolff
Lineup:
Scott Harris: Music, lyrics, vocals, programming
Track list:
1. prelude
2. ghost host
3. evolution
4. eternal
5. bloodlust
6. slayers
7. forever reign
hororhaus at Facebook
hororhaus at Bandcamp
hororhaus/transmigration records imprint at Youtube
hororhaus at Spotify
hororhaus at Instagram
hororhaus at Mixcloud
hororhaus at Shazam
hororhaus at Anghami
hororhaus at iHeart/
hororhaus at Amazon