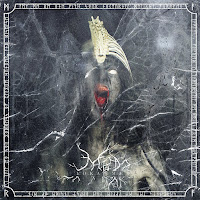 Band: Mara
Country: Sweden
Genre: Pagan black metal
Full Length: Loka Mær
Format: Digital album, jewel case CD, standard black vinyl/silkscreen on side B, opaque grey vinyl/silkscreen on side B, opaque grey/red splatter vinyl/silkscreen on side B
Label: Immortal Frost Productions (Belgium)
Release date: March 11, 2022
What a day to be alive, just finished a 7am-4pm shift at work, just came back from walking my dog Zeus and now I’m sitting here listening to the latest ‘Mara’ album, how badass of a day is that?
This is their fourth full length album (If I’m not mistaken) featuring six new tracks to feast your metal appetite with! Firstly let me say this, this album absolutely blew me away in structure, production and instrumentation. What makes this record so great is the fact that in six tracks they are able to generate that ‘big body feel’ sonically speaking at the same wave lengths as bands who are rocking these million dollar budgets and 10-12 track albums.
This band’s production is nicely polished (more sand papered down) since normally people use the term ‘polished’ as a negative context alongside words like ‘Stale, Sterile’ but my using of this term comes from the fact that they seem to have great knowledge in knowing how to make a record sound ‘larger than life’ and ‘powerful’ and that’s not a talent or skill that every band has (trust me on that) and that’s why it’s so fucking impressive.
Another thing I’m really impressed with is the instrumentation because holy shit do they sound badass! there’s so many spots on this record where they do these extended passages of music without vocals, but not in the cliché solo sense but just courses of music played to help ease the song either in or out but regardless it’s fucking beautiful and really helps the listener zone out and have the music take over your mind and soul.
The track ‘Wolf’ has a solid example of this with the first minute and thirty seconds there was this enchanting musical passage that just felt like a sunny days walk through a mystical forest, so engaging and satisfying! Then the music really began to pick up around the two minute mark but I mean for a band to think of adding stuff like that in before the song officially starts is absolutely genius!
The vocals are outstanding as well, with those rich, grovel like growls and screamed the way you’d hear in the trademark sub-genre of ‘Black Metal’ which is the genre this band Identifies as which I’d say was the nail hitting the spot!
I can’t say enough good things about this album honestly! It’s creative, hard hitting, brutal, technical and boundary pushing all at the same time and for only 6 tracks this record is an absolute BEAST and I can’t wait to hear more! –Corban Skipwith
Lineup:
Vindsval: Vocals, guitars
J: Guitars
Garm: Bass
P: Drums
Track list:
1. Myrkriða
2. Mara
3. Loka Mær
4. Wolf
5. Thursaseiðr
6. Hel
Posted by Dave Wolff at 2:09 PM