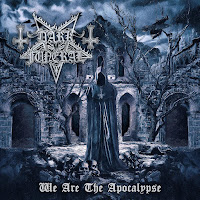 Band: Dark Funeral
Location: Stockholm
Country: Sweden
Genre: Black metal
Full Length: We Are the Apocalypse
Format: Vinyl, limited edition digipack CD, digital
Label: Century Media Records
Release date: March 18th, 2022
From my first viewing of their "Secrets of the Black Arts" promo to their first performance in Manhattan or anywhere else in the US, Dark Funeral remains one of my most listened to black metal bands. I still remember that show at the Bat Cave, I still remember those tense moments before they launched into the first song, I still remember the suffocating air of malevolence. The darkness they seemed to embody that night remained indelibly linked to them one way or another.
With fellow Swedes Marduk, Dark Funeral brought the black metal genre to unspeakable heights, and became practically unforgettable for the sheer hellish chaos and fury they bring to the stage and capture in the studio. In recent years they’ve assumed equally convincing heights of maturity and it wasn’t necessary for them to completely change to do so. On “We Are the Apocalypse” they’ve not dropped their essentials; it's what the band excels at, enough said there.
While new incarnations of black metal have appeared in the last decade, Dark Funeral have remained relevant and on top of what's going on in a genre that continues to evolve. Lineup changes and working with different producers, as well as growing organically and occasionally experimenting, led them to work more closely together as musicians and reestablish their standing as innovators. Since then, they have flourished and persisted in their vitality.
I should point out that their 2016 album "Where Shadows Forever Reign" could be considered their most progressive, combining more melodic guitar riffs and extended lyrics with caustic vocals, sharp production, and frantic blast beats. Artistically, it was similar to Immortal's "At the Heart of Winter". In my opinion, if Dark Funeral hadn't taken the direction they did on that release, we wouldn't have "We Are the Apocalypse" as it emerged from the studio.
From the sound of things, the band possibly wanted to create an album that would come across as more abrasive and sharp. Something like "Attera Totus Sanctus" and "Angelus Exuro pro Eternus", only with more track to track variety regarding speed. Listening to their previous album was like trying to find your way through Dracula's castle or the labyrinth in “Hellraiser 2”. The band conveys the same impressions here, only rawer and with less atmosphere. There are no preliminaries or elaborate introductions; they just get right down to business without any mercy.
First impressions might suggest that Dark Funeral isn't breaking any new ground, but listening more closely reveals the differences between this and the older recordings. From Venom and Bathory to Marduk and 1349, their presence and musicianship are well-rounded representations of black metal. Before heading into the studio, the band members seemed to have improved their precision and rigor a lot, pushing themselves to top form. Janne "Jalomaah" Jaloma in particular is almost inhuman in his speed, going beyond most metal drummers.
Dark Funeral's wall of sound is tempered by more tempo changes within tracks and tighter transitions between each, creating a sort of musical storytelling that fits well with the lyrics. They've come a long way since penning the lyrics for "Secrets of the Black Arts" and "Vobiscum Satanas". Those albums had well-written hymns to darkness, whereas the lyrics here immerse you in tales comparable to those of Robert E. Howard and Clark Ashton Smith at their darkest. This is only apparent if you look beneath the surface of the album and do a "deep dive." If you make the slightest effort you may find a horrifically entertaining experience beyond what you expected. –Dave Wolff
Lineup:
Heljarmadr: Vocals, lyrics
Lord Ahriman: Guitars, songwriting
Chaq Mol: Guitars
Adra-Melek: Bass
Jalomaah: Drums
Track list:
1. Nightfall
2. Let the Devil In
3. When Our Vengeance Is Done
4. Nosferatu
5. When I'm Gone
6. Beyond the Grave
7. A Beast to Praise
8. Leviathan
9. We Are the Apocalypse