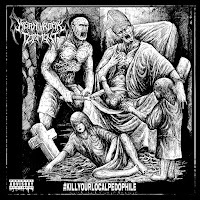 Band: Misanthropik Torment
Location: Lexington, Kentucky
Country: USA
Genre: Blackened death metal
Full Length: #KillYourLocalPedophile
Format: Digital album, CD, cassette
Label: Misanthropik Records
Release date: July 4, 2022
OK, here we go with the latest release from Misanthropik Torment, an outlaw blackened death metal band that self-releases all their material on their own label, likely because the subject matter is too uncomfortable to discuss openly. Members of the band actually left this time because the concept and theme of the album was too much for them to handle. See Erick Leviathan's interview from June 2021 or read the lyrics to “#KillYourLocalPedophile” at Bandcamp.
Since Erick Leviathan started the band around 2019, he has always touched on sensitive topics, and each release seems to become more extreme and controversial. Few bands, at least as far as I know, have addressed the issue of sex offenders, let alone had a point of view about how they should be punished. King Diamond brought this issue to light with "The Graveyard" in 1996. However, in all this time since, the topic of child molestation has remained unmentionable.
Due to Russia's invasion and armed conflict with Ukraine, MT's "Kill The Tyrant (Vladimir Putin)" single was met with mixed reviews and its share of controversy. I think Leviathan mentioned something about it being blacklisted on Facebook for violating community standards. The majority of his listeners take his side as Putin’s invasion is unanimously considered a crime against humanity. While Facebook considered this touchy, the ideas conveyed on an album yet to be released go much further.
Thanks to Jonathan Nesbitt, "#KillYourLocalPedophile" is one of Misanthropik Torment's most raw and "old school" recordings. If you are a fan of Pungent Stench, Brujeria, Carcass, Sarcofago, or Venom with some groove, you'll definitely appreciate the heavily distorted guitars and bass, stripped drums and gore-streaked vocals. Usually death growls, especially as delivered here, cause people to complain that they can't understand what's being sung. Leviathan, however, provides the lyrics for each track, so you can follow along.
On the subject of the lyrics, I can reveal the title track has a bit of a punk vibe, criticizing a judicial system that releases criminals and repeat offenders on technicalities and doesn't prosecute the guilty. I don't intend in any way to instigate a political rant here, but Leviathan's stance on vigilantism (and his personal experience as a vigilante) gives this album's advance streaming additional weight, both for the dose of reality he imparts as well as his deep dive into the issues addressed.
A sampled intro from David Fincher's 1995 film "Seven" now sounds more relevant than it did in 1995. The internet and people's increasing need for instant gratification make it increasingly difficult to hold people's attention long enough to provoke them to think. My point is not to get in people's faces, make them mad, or provoke them into arguing just for the sake of it. This is ultimately unproductive. I mean actually inspiring people to think.
Maybe Leviathan integrating extreme viewpoints with music can encourage genuine reflection. After all, extreme metal bands have been doing this since the mid-eighties. He does a good enough job at this, not only addressing sex offenders but also the same offenses committed within the Catholic Church and Hollywood. Further insight is gained into the "kill everyone" lyrical content of thrash and death metal. There is a good reason for the anger here, which most rational people would feel, and it's not a case of being mad at the world (or pretending to be to “fit in”) or at oneself.
This is just my interpretation of the album, and I do not intend to pass it off as the "right" one. You may perceive it slightly differently but the theme and concept generally speaks for itself. –Dave Wolff
Lineup:
Erik Leviathan: Vocals, lyrics
Jonathan Nesbitt: Music
Track list:
1. Kill Your Local Pedophile
2. Severed Penises
3. Condemned To Suffer
4. Separate the flesh
5. Hollywood Shall Burn
6. Grotesque Murderous Rampage
7. The Art Of Torture
8. Bleeding Orifice
9. Bodily Dismemberment
10. Impale The Priests