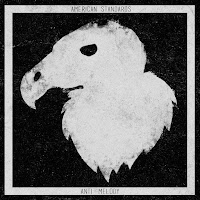 AMERICAN STANDARDS
Anti-Melody
Independent
Release Date: April 28, 2017
Since their 2011 inception the Phoenix, Arizona (USA) post-hardcore band American Standards have displayed a work ethic as fiercely determined as the eight tracks recorded for their fourth full length Anti-Melody. The bio I was emailed with the Bandcamp link said the band premiered Anti-Melody online with Revolver Magazine, Alternative Press and Lambgoat besides touring with Every Time I Die, Norma Jean, Atreyu, Knocked Loose, Zao, Emery and building an 80,000+ web following in the process. This is especially impressive considering personal tragedies befell some of the band members while scheduling studio time. These are reflected in the musicianship and vocals on the finished product; one should approach this with great care remembering how personal the material sounds to those in the band hit hardest by the upheavals in their personal lives. Too often such incidents are used to sell records, and yes it’s disgusting because the personal impact it has on people is overlooked too often (I don’t “hate” money but I do hate what people do to gain at the expense of others). What I appreciated about Anti-Melody even more than its blistering fusion of hardcore, thrash and nu-metal and the new songwriting methods the band aspire to, is the series of incisive diatribes about human nature in some form the impact of greed when critical thinking is removed from the picture. A fitting example of this is Writers Block Party, which was seemingly written about the public’s desire for the media’s “violence fix”. From torture porn horror to the latest serial killer documentary. It used to be thirty-six channels to present it, now it’s in the three figure range, not counting internet outlets. “And the crowds want more/They want violence before the storm/The clouds came in and the lights went out/We were guided by the roar.” The message is in fact still relevant, more than ever. Church Burner, Bartenders Without Wings and Danger Music #9 share similar sentiments about the impact the vested interests of big businesses have on us. Carpe Diem, Tomorrow and Cancer Eater explores said impacts from the viewpoint of the viewer, the consumer and the small man at the bottom. As for the musicianship I hinted at, there is a coarseness and range of emotions I’ve rarely heard from post-hardcore or nu-metal bands, making this album edgier than most. American Standards filmed promotional videos for Writers Block Party and Carpe Diem, Tomorrow which can be viewed at their Youtube channel. -Dave Wolff