Full Length Review: THE CRUCIFIER Voices In My Head 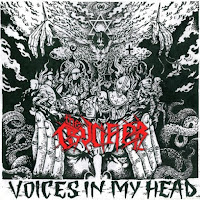 THE CRUCIFIER
Voices In My Head
Punishment 18 Records
Release Date: September 5, 2017
Voices In My Head is an album I would have listened to regularly if it had been released in 1986. If anything for the stamp The Crucifier places on the thrash genre. It reflects the time when no two bands sounded alike and each had a distinct approach. Looking up their influences on Facebook I found Razor, Sacrifice, Rotting Corpse, Aggression, Exodus, Exhorder, Dark Angel, Blood Feast, Vio-Lence, Sacred Reich, Metallica and Slayer among a few others. Listening to the album I found no indications of this band copying the formulas those bands established in the 80s; rather reinterpreting and conveying it their own way. The curse of generic thrash has missed The Crucifier completely, and you can hear this for yourself. As the band is based in Athens, Greece they write and compose without the additional pressure of trying to measure up in the American market. Voices In My Head is their first full length since Cursed Cross was released in 2006 (their debut full length was Merciless Conviction released in 2002). Following it was a series of compilations and splits: Thrash Metal Blitzkrieg Vol. 3 with Violent Attack, Disaster and Crimson Steel, the split compilation Two Shots Of Thrash Metal with Bywar, a split EP with Hate Your Fate (reviewed this past March by Reggae) and a split CD with Wanton Decay where they re-released Cursed Cross. Voices In My Head is likewise the first full length they released that I got to listen to, even if I am a latecomer I can say the band’s handling of the sound, attitude, fortitude and stamina of classic thrash is impeccable. Unlike 90s retro thrash and the current thrash resurgence, Voices In My Head sounds like it was done by a young band setting out to blaze the trail for bands to follow. It could easily have been one of the many albums I acquired through cassette trading. I appreciate how the album starts with no preliminaries or introductory track, just a brief drum fill before Within Insanity is underway. The closest The Crucifier come to sounding like Slayer in any noticeable way is the subsequent drum fills, along with the fadeout solo, but again they don’t rely on simulating the exact scales, chops or chord progressions of any other band you’ve listened to for years. The production has a compressed quality, especially in the machine gun riffs delivered by the guitars and the cadenced lead and backing vocals, that does much to put the energy contained in their songwriting across. This is most effective in Open Your Eyes, Happy Face Man, Forgive And Don't Forget. Born To Be A Slave, Imaginary God and the title track. I urge thrash fans everywhere to acquire a copy as soon as possible. -Dave Wolff