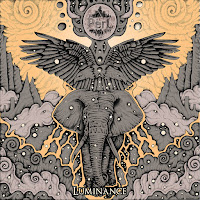 PËRL
Luminance
Apathia Records
To be released November 17, 2017
I really like this album. It is instrumentally well played. Lyrically the vocalist has a smooth sound. I like the way it sounds enough that at some point in the future I would be inclined to translate the lyrics. There is a calm mellowness. Not being able to understand the lyrics, for me, allows more focus on the music. It lets me feel more. This is something you can close your eyes and fade away into. While it is more ambient, there are harder pick ups. So it has a nice balance and proves that no matter the language, you can feel good music. Perl is made up of Aline- guitare, chant, Bastien-basse, Thibault-batterie, percussions. Their hometown is Melun France. Luminance is the band's second album. It is self produced and set to release November 17, 2017 They are on the Total Autoprod label. Watch out for these guys, I have a feeling we will see more of them in the future. -Deanna Revis