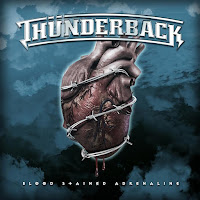 THUNDERBACK
Blood Stained Adrenaline
Independent
Available at CDBaby
Release Date: 2015
Sometimes you get musical groups that are incredibly easy to categorize and then sometimes you get groups who, aesthetically speaking, SHOULD be easy to categorize but actually aren't. I'm not exactly sure what THUNDERBACK is, - nor am I sure how to feel about the group but I can quite safely confirm this is unlike anything I've listened to in the past. Their 2015 release, 'Blood Stained Adrenaline' is very millennial in a way. It's a hard album to actually get one’s magnifying glass into as an object of scrutiny, but if I had to pinpoint it I'd draw comparisons to post-grunge groups, even if they don't particularly fit into that bracket. The album begins with 'Intro', a collection of typically satirical soundscapes resembling a wayward jamboree of sorts. One's thoughts begin to endlessly contradict one another. Immediately upon listening I was faced with the crisis of not knowing whether it's offensively derivative or mind-bogglingly unique, - and the truth is that it's probably neither but an unexplored middle ground. When I saw the group being defined a seemingly infinite amount of times as "Nu-metal" I had prepared for an onslaught of what that genre typically has to offer. Though oddly enough there's nothing truly metal about the group, yet alone Nu-metal. 'You' is where the group sounds closest to heavy-metal and I think it's largely due to the vocalist whose style is a seasoned mixture of MIKE PATTON's nasal nuances and OZZY OSBOURNE's… well, Birmingham-ness. Of course there are abstract dissonant vocal harmonies and I'm not entirely sure where it comes from. 'Scene of the Crime' sees the group resorting to 70s pop-punk ala THE BUZZCOCKS and THE CLASH and it really makes you wonder how the group could slot themselves into a singular category, especially one as riddled with pre-conceived notions as Nu-metal. My favourite song is 'Keep On Runnin' because the chorus is infectious. They have ill-fitting uplifting melodies that actually become enjoyable. This is a song where Madchester actually came to mind! The title track is a bit too long-winded and wasn't one of my favourites. 'Threefold' is in 3/4 (clever!) and it's kind of a break-up song. The album closes with 'Remember Me' which features piano as the leading instrument accompanied by... wait for it… pan-flutes. Interesting choice but it just sounded too artificial. The only real shortcoming is the production. If it was less stripped-back and garage-y, and more professional, I think it would be an artistic record that could possibly even enter the mainstream. -Jaime Regadas