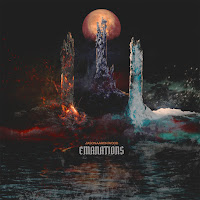 JASON AARON WOOD
Emanations
Independent
To be released November 24, 2017
This is the sixth solo album of this one man band, and is due for release on November 24, 2017. The 8-string guitar is phenomenal! And Jason's voice and amazing guitar work go hand in hand. This album is raw. It is loud. It is in your face! The melodic lyrics, the deep growls, and mind blowing guitar solos are a perfect balance. Jason Aaron Wood is a guitarist, vocalist, composer, and music educator, As well as being an accomplished solo artist, Jason is currently guitarist of Ol Sonuf and Tonesboden. From the Washington DC Metro area, he began his journey with guitar at age twelve, inspired by classic metal and classical composers. As for me, I am inspired to listen to Jason's previous works, and own Emanations when it is released. -Deanna Revis