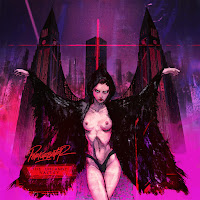 PERTURBATOR
The Uncanny Valley
Blood Music
Release Date: May 6, 2016
Perturbator are a solo project from France that plays a very horror and sci-fi orientated form of dark synth music and this is a review of his 2017 album "The Uncanny Valley" which was released by Blood Music.
Industrial style beats start off the album along with some synths that also mix in elements of 80's era synth pop while also sounding very modern at the same time as well as mixing in the atmosphere of some classic horror and science fiction movies and one track also introduces robotic voices onto the recording.
A great portion of the tracks are all instrumental while elements of ambient and experimental are also utilized at times and some songs also show an influence of metal but capturing the atmosphere with synths instead of guitars and as the album progresses a brief use of female vocals can also be heard on a couple of the tracks and melodic guitar leads are also used briefly and some of the songs are also long and epic in length.
Perturbator plays a style of dark synth music that captures the atmosphere of 80's horror and science fiction movies while also mixing in some metal influences and modern electronic music elements, the production sounds very dark while lyrics when they are utilized cover science fiction themes.
In my opinion Perturbator are a very great sounding sci-fi orientated dark synth solo project and if you are a fan of this musical genre, you should check out this album. Recommended tracks include "Neo Tokyo" "Venger" "Assault" and "The Uncanny Valley". 8 out of 10. -Loki Astaroth