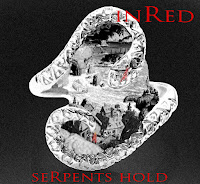 INRED
Serpents Hold
Independent
Place of origin: Lindenhurst, New York, USA
Genre: Symphonic folk/black/death metal
Release date: May 11, 2011
I remember when the core members of Inred were in Deathkids in 1996. They started in their early teens and were active in the Long Island club scene appearing at clubs like The Roxy. If memory serves I was one of the first local writers to review their demo and CDs, giving them exposure in Good Times Magazine, though it was the staff that came up with the tagline “evil comes in all ages.” Toward the decade’s end their activity increased until they inexplicably disbanded. Fast forward to the mid 2000s and they returned to writing and composing, only now they were writing and composing classic heavy and power metal as Inred. I heard several demo tracks and was favorably impressed with their new direction, but even so I had no idea how much they would progress into what they became in the early 10s. They haven’t released anything new since It Begins And The Search Never Ends (2010) and Serpents Hold (2011), but I hope they continue as those full lengths validate their hard work from the debut Deathkids demo onward. The former is rawer and retains their death metal roots, while the latter shows them tightened, polished and honed into a streamlined machine of technical and visceral energy. It sounds miles ahead of the material they composed when they started and if you’re not prepared for how far they’ve come Serpents Hold will shatter your expectations A handful of influences Inred cite on Facebook are Wintersun, Finntroll, Equilibrium and Ensiferum with Iron Maiden and composers Hans Zimmer and Danny Elfman. The formula by which everything is structured is a conclusive remonstration that an extreme metal band can synthesize musical expressions they embraced from their youth and add a host of others picked up along the way, no need to reject anything as anachronous. Serpents Hold is as theatrical and industrious as anything from Europe or Russia, and displays ideas you may not have heard from the bands by which they outlined and sculptured their work. The band’s symphonic elements come on strong, the lead solos soar, and the vocals strive toward the theatrical quality of the music. The electronic sounds and keyboards keeping company to their fusion of folk, black and death metal is Inred’s most unique idea. Sometimes those sounds resonate of prog metal, other times 80s video game effects, other times horror movie soundtracks, but they fit remarkably well added to the myriad genres anatomized and reconstructed here. Standout tracks include The Crimson Wind, The Last Battle, Rogue and their cover of Anataboshi, originally recorded by Milky Way, an international dance-pop act from Japan. If you listen to the original recording it screams for reinterpretation. Inred cover it flawlessly, as if it had always been a metal song. -Dave Wolff