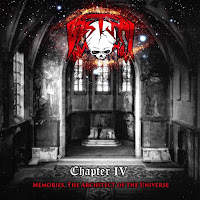 BESTIAL INVASION
Memories: The Аrchitect Of The Universe
Place of origin: Ukraine
Genre: Technical thrash metal
Release date: May 2, 2018
The new single from Bestial Invasion shows the Ukranian band continuing to progress, as they’ve done at a breakneck rate since their 2015 debut single Silent Wonders. I’ve been covering Bestial Invasion for a long time; more than ever I see them evolving into a force for the creative, unorthodox spirit of making music as well as the pugnacious, camaraderie-driven spirit of thrash metal. The full lengths from 2015 and 2017, Act Of Retribution and Contra Omnes, and their 2016 EP Trilogy: Prisoner Of Miserable Fate are already brilliant by old school standards. This new single leaves those releases at the starting gate when it comes to exercising imagination and taking overlooked aspects of older songs, blowing them up and taking them in new, unforeseen directions. Holding on to the thrashier edges of their songwriting, they add a greater number of time changes and create new arrangements that unfold smoothly for their technical advancements. From a fleeting acoustic introduction starting Memories. The Аrchitect Of The Universe, there is clearly more emphasis on serene guitars, presented in a way that is classy as opposed to what would have been considered wimpy in the 80s. Many bands like Queensryche, Testament, Destruction and Fates Warning wrote such parts into their songs, placing their stamp on their acoustic sections and achieving the desired effect. Bestial Invasion do the same in the intro and in sections where acoustic guitars accentuate the heavier, crunching guitars from underneath. I can describe it more graphically, but you can’t appreciate the arrangement without hearing it firsthand. The two part guitar harmonies and solos have improved in the few years the band has worked together, and new bass sounds are experimented with to accompany the John Cyriis (Agent Steel) inspired vocal scales. I’m assuming this is an advance single from a new full length the band is working on. If so, this has made me curious as to how the other songs will sound. Bassist Metal Priest’s Youtube channel World of MP has several new videos posted, including album reviews. -Dave Wolff