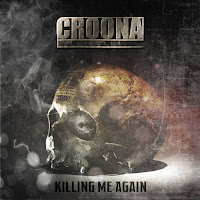 CROONA
Killing Me Again
Independent
Place of origin: Gothenburg, Sweden
Genre: Experimental/harsh electro/industrial
Release date: March 19, 2018
Frederick Croona started this project three years ago as an experiment in mixing industrial, trance, electro and what is called futurepop. It mustn’t have been long before he discovered endless territories to move into, since his experimenting progressed to three full lengths and new material on the way. This includes a single released in March, marking his evolution as a musician, songwriter and composer. Croona has made occasional changes to his approach, but makes a point of staying away from labels such as aggropop while keeping a bellicose, rapacious edge. Most of the harshness exists in the vocals, percussion and keyboard effects driving the three versions of Killing Me Again appearing on this single. It’s a few steps ahead of 80s proto-techno, and a few steps away from Marilyn Manson and Rob Zombie. Images coming to my mind with the remixes include long forgotten computer machinery described in John W. Campbell’s 1934 science fiction tale Twilight. Twilight is a particularly tragic tale, as computer technology completely wipes out all human ambition in the distant future. It seems to fit the sense of overwhelmed suffocation of the lyrics. Other images will come to the minds of listeners, as some may prefer particular remixes over others. There is much room to choose the way each track is reinterpreted. My own favorite remix is the first, not just for its catchiness and commercial potential but for the most diverse instruments and sounds. The song becomes a mural of infinite textures, with sufficient guitars for techno-metal fans. The second emphasizes clean electronics, and the third sounds composed under more somber a mood with organic percussion, harsher synths and more distortion. I would have to say this remix is my second favorite of the three. You can hear this release and the three full lengths at Croona’s profile at Bandcamp. -Dave Wolff