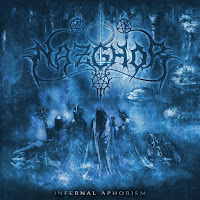 NAZGHOR
Infernal Aphorism
Non Serviam Records
Place of origin: Uppsala, Sweden
Genre: Black metal
Release date: October 13, 2017
Nazghor are a band from Sweden that has been featured before in this zine and plays a very melodic and atmospheric form of satanic black metal and this is a review of their 2017 album "Infernal Aphorism" which was released by Non Serviam Records.
A synth orientated intro starts off the album along with some ritualistic spoken word parts before going into a faster direction which also uses a great amount of tremolo picking and blast beats to give the songs a more raw feeling along with the solos and leads being done in a very melodic fashion.
Vocals are mostly high pitched black metal screams while all of the musical instruments have a very powerful sound to them along with the riffs also bringing in a great amount of melody and the songs also bring in a great mixture of slow, mid paced and fast parts as well as some of the tracks being very long and epic in length, on some of the tracks atmospheric elements are also mixed in with the heavier sections of the music while as the album progresses a brief use of keyboards, melodic chants, clean playing and whispers can be heard on a couple of songs. spoken word parts,
On this recording Nazghor takes their melodic style of satanic black metal into more of an atmospheric direction, the production sounds very professional while the lyrics cover Satanism and nullification of religious existence themes.
In my opinion this is another great sounding recording from Nazghor and if you are a fan of melodic and atmospheric satanic black metal, you should check out this album. RECOMMENDED TRACKS INCLUDE "Malignant Possession" "Deathless Serpent" "Spawns Of All Evil" and "Infernal Aphorism". 8 out of 10. -Loki Astaroth