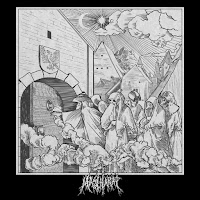 MASCHARAT
Mascharat
Séance Records (Australia)
Place of origin: Milan, Lombardy, Italy
Genre: Black metal
Release date: September 15, 20174
Limited to 500 copies
Available for streaming on Bandcamp
The literary concept Mascharat explores on their debut is fitting for black metal, and the genre is a fitting vehicle to introduce listeners to a centuries old tradition from their native Italy. In an interview for Occult Black Metal Zine the band explains basing their tale on the Carnival of Venice, and basing their lyrics on literature and philosophy as well as occultism and esotericism. But this album is occult for delving into history, finding a part of it that many may have not known about, and telling about it while drawing parallels to modern times. For fans of extreme music with a taste for the observance of something historically meaningful that is celebrated to this day, you’ll want to seek this out. You’ll likely have to research the tradition of Venetian Carnival, reading as much material as you can find. The band make a point of extensively researching their subject matter and it shows. For the amount of work channeled into this recording, it’s worth taking the time and besides, the background information is needed to get the complete picture. According to historical accounts the Venetian Carnival was started in 1162 to celebrate the Venice Republic’s victory over the Patriarch of Aquileia. The carnival involved wearing costumes and masks to symbolize rejection of religious dogma, Outlawed by the Holy Roman Emperor and the Emperor of Austria in 1797 and practiced in secret once or twice, it was officially revived by the Italian government in 1979 and remains a prominent annual festival today. Whether or not you appreciate black metal with raw production, you can tell Mascharat display their research both musically and lyrically, with a well-educated grasp on the tradition as what they call an allegorical story. Being that it’s told within the medium of black metal, they somewhat present it as a parody of religious dogmas or false promises under a religious guise. As much as I understand their perspective; I’ll leave it to the listener to decide if the carnival is a parody, an homage to the past or a way of casting aside centuries’ worth of repression. However you choose to perceive it, this album is a commanding figuration of illusion and redemption, told with a musical backdrop as animated as it is astringent. As I gather, the lyrics are sung entirely in Italian in order to sustain the mystique, and in many moments you feel the tradition brought to life in a way that will inspire you to learn more. -Dave Wolff