Interview with Anthony Hoyes of VORZUG by Dave Wolff 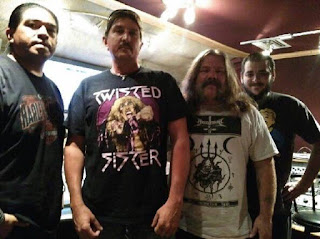 Interview with Anthony Hoyes of VORZUG
Vorzug is described as being “four old guys playing old-school style death metal in a newer sort of way.” What effort does the band channel into reinventing death metal?
Our perspective on that is to look at our influences and put together an idea that mixes genres from each influence, not just death metal, which adds elements both fresh and nostalgic to the listener. The vocals will keep our sound death metal while we experiment with different elements in our music. Or at least that's what we like to tell ourselves.

Who are some of the bands currently signed to Apollyon Entertainment? How much promotion are these bands getting?
Right now the signed acts are Vorzug, Luciferian Insectus, and Crucible Steel. There is a doom band that we have in development; as of right now we're rebuilding everything including the name. We have a few bands in negotiations and are doing some A&R consulting for a couple of rappers and a country artist. The business model I like to set forth is simple. Quality talent with the best distribution and a solid promotional campaign = success. So if like to think that when it comes times for promotion the bands are all heavily promoted and are happy with their PR. We use in house and outside PR to maximize the effort and we like to tailor each campaign to the specific band. We have the bands’ input on any ideas they have for marketing.
Tell of the signing of Luciferian Insectus and Crucible Steel. Where are they from and how much material do they have?
I heard Luciferian Insectus on Metal Devastation Radio then later heard him interviewed on that station. He was looking for a label so the DJ got me in contact. It's a one man band. Same with Crucible Steel it's a one man band. He had done a cover of my bass player Rock Rollains other band Southwicked. I listened to a lot of his material before then, but I wanted to work with him as well. Both have single tracks on various social sites and Luciferian Insectus has a video out right now.
For what song did Luciferian Insectus produce a promotional video, and where on the net can it be viewed?
The track is called Deliver Me In the Name Ov Satan off the Godless full length album, which will be out October 7th 2016. It is available on Youtube and Heavy Metal Television. There will be more places shortly; the album was the priority to release first, then we will distribute the video to Vevo, Dailymotion, and it will make its rounds. http://youtu.be/v0gyOY1EnQc is the link to the video.
How actively are you seeking new bands to support through Apollyon Entertainment?
We're actively seeking bands, but we are more interested in quality rather than quantity. So we have certain criteria that bands need to meet before we will deal with them, even in the Artist Development stage. However if bands want to submit to us we always welcome their submission.
Where would you like to see Apollyon Entertainment in the years to come?
It’s growing and moving forward, what I'd like to see. In business as it is in life perception is reality. I'm looking forward to the Luciferian Insectus release on October 7th. Crucible Steel is coming out in November, and "Three" from Vorzug comes out in December. 2017 has a couple of albums being negotiated so we're moving in the right direction.