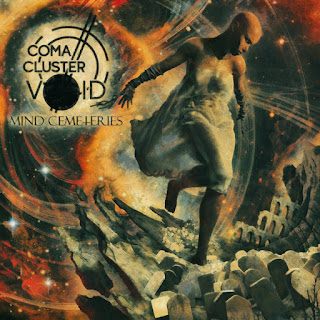 COMA CLUSTER VOID
Mind Cemeteries
Independent
http://www.facebook.com/coma.cluster.void
http://comaclustervoid.bandcamp.com
http://www.youtube.com/comaclustervoid
This technical/avant garde death metal band has an approach to extreme music not quite like anything you’ve previously heard. Math metal and progressive death metal have long demonstrated how bands can fit notes and chords into a guitar progression in ways that hadn’t been attempted, making it sound chaotic while being even more tight and orderly than their predecessors. It showed new ways of playing that could be expanded upon by musicians to follow. Today bands are still traveling the path the first math metal bands set in the late 1990s/early 2000s, and every now and then one will enter my world to my gratitude. One fan posting feedback about Coma Cluster Void on their official Bandcamp page described them as how it would sound “if Meshuggah lost their fucking minds at a Gorguts concert.” This sounds descriptive and accurate enough, only I’d wonder what might come of a meeting between Sigh and The Dillinger Escape Plan. Coma Cluster Void is a collaboration spanning three countries: the States, Canada and Germany. The collective minds that spawned Mind Cemeteries have created something cutting edge and schizophrenically diverse. After two singles and one album, the band is already being hailed as groundbreaking by internet magazines such as No Clean Singing and Metal Injection. This alone shows potential to transcend the financial issues surrounding indie label and unsigned bands and convince zine editors to take note. Coma Cluster Void take genuine chances with their material, ignoring the constraints of financial viability and fabricated acceptance, and it doesn’t take long to realize the open mindedness that fueled them to risk everything in the songwriting and composition process. The brief intro Prologue: I Am sounds like something you might hear on a black metal album, making it possible for the following cuts to take the listener completely by surprise. The bait-and-switch between the intro and the rest of the songs is a profound moment. The dissonant, wholly unorthodox complexity of Iron Empress, Drowning Into Sorrow. Mind Cemeteries and The Hollow Gaze is something listeners will either love as pure genius or hate as pure noise, though its level of originality will more than satisfy those thrashers seeking something different, with its inventive arrangements and manic death-metal-meets-jazz drumming. The mood generated by the intro appears a second time in Interlude: I See Through Your Pain and Epilogue: As I Walk Amongst The Sick. The inclusion of these three pieces goes a long way toward making this album more of an artistic statement than it would have been if they weren’t included. Also check out the band’s promotional video for Everything Is Meant To Kill Us, on their Youtube profile, -Dave Wolff