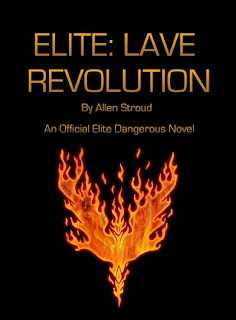 Context, assumptions and comments: I’m not a gamer or a Sci-fi buff, so I came to the book with no prior knowledge of Elite Dangerous or any of the material associated with it. The pre-existence of the structures and some component parts of Lave Revolution did not detract in any way from how impressive Allen Stroud’s vision and imagination are with the story, scene setting and depth of vision for how life would be in the circumstances and environment created by Stroud in this story. His ability to create believable worlds and grasp of the detail in this book are outstanding.
Overview: Lave Revolution is a rocket fueled white knuckle ride of a space adventure that grips you from the opening scenario to the Epilogue and beyond. It starts at a hectic pace and rarely slows down right up to the conclusion of the final battle. But it’s more than just a ripping yarn. The book is sprinkled with little gems throughout, designed to enhance the reader’s knowledge and enjoyment. Stroud’s attention to detail is impressive, not easy when describing everything from parasites to planets.
For example, the principle character, Pietro Devander, is involved in a card game, Perihelion, when the action starts. Typical of Stroud’s level of detail in this book, the game and its rules are explained in a separate chapter.
A big plus for me was that Stroud’s characters are all human. Nothing challenges the willful suspension of my disbelief more than farcical alien life forms. Stroud’s understanding of the environment in outer space, the vehicles, and the basic constraints of living inside machines in space is impressive, and he uses this well to add to the challenges of his characters. His descriptions of space travel, the many different craft and space stations are vivid and believable.
The book itself is very efficiently written and the story fast paced. I found myself having to frequently go back to re-read a section I’d skimmed through in my eagerness to find out what happens next. Stroud makes every word count, and the reader can’t afford to skip read without the risk of missing a small but important detail.
The appendix section that follows the story’s epilogue is hugely entertaining and helps tie up some loose ends and fill in some of the gaps. However, at the conclusion, I was still unclear as to the final fate of just about all the main characters. I would think this deliberate on Stroud’s part as the book screams out for a sequel. The appendices do contain some ‘fat’ but where it occurs it does not detract from the main story and adds to the overall pleasure of the book.
Ripping yarn aside, Stroud pre-supposes the reader buys into democracy being a good thing to be strived for at all costs. Also that dictators are all evil, egotistical madmen. Why not? It’s the premise on which just about every thriller has been based for the last century. That said, contained within ‘The Walden Writings’ is the best written and argued critique of democracy I’ve ever read. This exceptional piece of writing should be set in ‘A level’ Politics exams, the student being asked to present an alternative point of view.

Structure: The ‘pre-story’ opening section is written as a Lave Reconciliation Project researcher’s guide note. Throughout the story there are further researcher guide notes and references, giving the feel that the work is an historical academic study of events leading up to and just beyond the revolution on Lave in AD 3265, the overthrowing of the dictator, Walden, and his regime, and the creation of a fledgling democracy on Lave. The academic study aspect is enhanced by the appendices. These would be useful to read before the reader gets into the meat of the story where it not that the reveals these sections contain may detract from the excitement as the story itself unfolds. Certainly ‘The Missing Files’ section would have explained the fate of the Yamorro, an irritating thread left hanging for me right past the end of the main tale, but put right by the inclusion of this section of the Appendix.

The story: Epic is an understatement when describing this futuristic Sci-fi tale. It makes Star Wars seem parochial. Yet, as I said earlier, it doesn’t skimp on the details. The characters, scene settings and locations are efficiently and skillfully described, prompting our imagination to have fun filling in any gaps. Allen Stroud gives just enough descriptive to set a scene without falling into the trap of sacrificing the brisk and relentless pace for bloated detail or superfluous dialogue.
The action starts almost immediately and continues at a breathless pace throughout. The story itself unfolds mainly from perspectives of five principle characters, Pietro Devander, Heldeban Kel, Gebrial, Admiral Bryce Jander, and Bertrum Kowl, albeit there are many more characters that become the reader’s focal point for periods of the book. Their stories run in parallel, butt up to each other or overlap, and are so cleverly written that the reader is rooting for whoever the character is at the time of reading. This makes sorting the good guys from the bad difficult in the early part of the book, but by the end we discover (or can decide ourselves) who sits where on the moral hill.
The book is written in relatively short chapters, each ending in a cliff hanger of some sort, with the fate of the principle characters in the balance. Stroud dreams up worst possible case scenarios and drops his unfortunate heroes into them, then jumps the narrative to somewhere else. Sometimes by the time a character’s story line re-appeared I’d forgotten all about their plight, all credit to Stroud’s action scenarios in between.
Stroud juggles with a mass of elements in this book, the primary forces and politics of the Empire, Federation, Alliance, LaveSec, and even pirates, as well as the situation on Lave itself, and its near neighbours. He develops the story giving us sufficient background and history to understand the positions taken by the various protagonists and gives us an idea of how events unfolded to create the various power bases. Having said that, by the end of the book I was left unclear as to how Walden rose to power on Lave and managed to subjugate the population with his 1984 style dictatorship. Appendix A (Guide to Lave) and Appendix B (The Walden Writings) didn’t really explain his rise. Perhaps this small detail can be covered in the next book, along with the fates of Devander, Kel and Gebrial.

Overall: Allen Stroud has written a splendid book with something for just about everyone, the proviso being that the reader a) has an imagination, b) can stand the pace and c) isn’t looking for a love interest. It is technically near perfect and, whilst epic in itself, still appears as just one part of a bigger story, a series of sequels begging to be written. -David Smith
Posted by Dave Wolff at 4:08 PM