CD Review: ARS VENEFICIUM The Reign Of The Infernal King 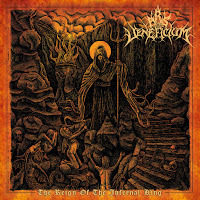 ARS VENEFICIUM
The Reign Of The Infernal King
Immortal Frost Productions
Putting it simply, this album crushes! Being more elaborate, Ars Veneficium is the consummate band to greet me on a Sunday morning upon awakening. The band personifies anger, hate, sacrilege, blasphemy, darkness, vengeance and pure unsullied evil to reestablish your predilection for all things that are raw and satanic. The Reign Of The Infernal King is the debut full length from this Belgian black metal band and if you appreciate Marduk, Bestial Warlust, Desaster, Blasphemy and Maniac Butcher it’s recommended listening. This band has been active since 2013, was founded by former members of Belgium’s Eratomania (guitarist Ronarg and vocalist S. who is also the band’s lyricist) released two EPs (2014’s The Abyss, 2015’s The Abyss/Live Recordings) and released a split full length with Finland black metallers Azaghal (The Will, The Power, The Goat) in 2015. A promotional single was released in digital format in 2016 to announce the album’s release. Extinguished Are The Candles Of Holiness is at Bandcamp if you want to go there first. Following a premonitional intro Damnation Of The Soul immediately unleashes a whirlwhind of energy and continues to pummel you with slower breakdowns. Introducing you to an eternity in the underworld, it allows little respite before Fallen To The Realm familiarizes you with the demons in charge of flaying your soul, which they will be doing with earnest throughout the rest of the album. The lead vocals of S. and occasional backing vocals of Ronarg give voice to those demons. Ronarg and guitarist Archcaust likewise know what they’re doing with their instruments. The progressions written and composed by Ronarg can be simplistic when they want to be and display dexterity when they want to, and bassist Lava handles those progressions well. Drummer Norgameus (also of Murder Intentions) delivers every drum hit like a sledgehammer splitting your skull and oozing blood and brain matter. Whoever worked on producing the album got the drum sound just right so the snare hits and fills are clear in showing the direction in which they push the material along. This is a promising debut so contact Immortal Frost to acquire a copy. The run is limited to 1000 CDs, 500 jewel cases, 500 slip cases and 500 12” vinyls, so contact the label if you have an urge for some extreme and impious black metal). -Dave Wolff

Track list:
1. Intro
2. Damnation of the Soul
3. Fallen to the Realm
4. Angel of Angels
5. Extinguished Are The Candles Of Holiness
6. Reign in Darkness
7. As Flames Spread Into Chaos
8. Thy Will, My Hands
9. Bringer of Light