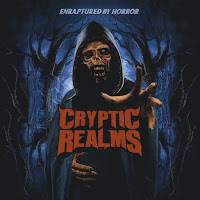 CRYPTIC REALMS
Enraptured By Horror
Iron Blood & Death Corp / Death in Pieces Records
This release is straight up old-school death metal in the realms of OBITUARY and DEATH. This release has muddy production, but in my mind that is a good thing, as it sounds as if it was produced in the 80's or early 90's. There are eight tracks on this release, and all are great. ''DOOMED CATHEDRALS'' AND ''IN MORTAL DISTRESS'' would have to be two of my favorite tracks on this album. (They are all pretty good, though). I have never heard of this band until today, but I will be sure to check out more stuff by them now that I have heard some of their music. Pure classic death-metal for the win! I highly suggest than you all give this release a listen. Death-metal forever! -Devin Joseph Meaney