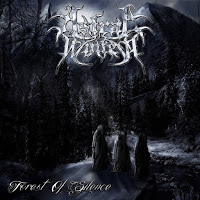 ASTRAL WINTER
Forest Of Silence
Immortal Frost Productions
Forest Of Silence is an epic symphonic black metal album written, arranged and recorded with great care from this Tasmania based band. I’m not certain if Astral Winter intended Forest Of Silence to be a conceptual album but it reads like one lyrically and thematically. I’ve heard some memorable conceptual metal operas and this recording sounds like it belongs on the list. If you’re one of those people out there who still think all black metal is untalented noise and screaming, you’ll be missing out if you don’t give Astral Winter a chance. Released in 2016, this is the band’s third full length after Winter Enthroned (2011) and Perdition. It is available in a limited edition of 500 copies and available for streaming at Immortal Frost Productions’ official site. Most evident of the band’s potential is in the buildup in Pathway To The Ancient Forest that slowly gains momentum and tension until the song finally erupts in a whirlwind of refined chaos, complete with keyboards and guitar solos proportionately equal to progressive and symphonic power metal. There is something here for listeners of Luca Turilli, Immortal, Enslaved, Sear Bliss and even gothic metal and the soundtrack to 1982’s Conan The Barbarian if you happen to look closely enough. The song arrangements make you feel the vast, snow-covered, rain-drenched landscapes Astral Winter bring to life on this album. You feel you are actually there accompanying the band’s journey through this universe of darkness; as you know this is what quality black metal does. The six and a half-minute instrumental As I Embrace The Winter Winds is another example of how Astral Winter draws you into the listening experience, with a chorus of female voices, dexterous guitar solos and more melancholy wintry, goth-esque keyboards. Assuredly one of my personal favorites of this recording. Defenders Of The Astral Kingdom (Part II) has more of the buildup you heard in the first track, leading to a truly bloodcurdling shriek. The lyrics reminded me of Satyricon’s debut recording Dark Medieval Times, depicting a lone wanderer consumed by endless darkness surrounding him and being granted with a demonic, almost insurmountable power. Once again the guitar leads and keyboards are utterly brilliant in their execution. A second instrumental Within The Frozen Streams Of Time, consisting of piano and keyboards, precedes the final track The Palace Of The Prophets and the end of the traveler’s journey. This is the longest song recorded for the album, revealing the forbidden knowledge gained and the inevitable rebirth to share it with humanity or destroy it. One of 2017’s finest moments in extreme metal so far. -Dave Wolff

Track list:
1. Pathway To The Ancient Forest
2. When Moonlight Evokes The Frozen Nights
3. As I Embrace The Winter Winds
4. Defenders Of The Astral Kingdom (Part II)
5. The Summoning Of Arcane Magic
6. Within The Frozen Streams Of Time
7. The Palace Of The Prophets