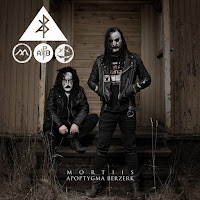 APOPTYGMA BERZERK
Sins Of Mine (Mortiis remix)
TECHNOMANCER FEATURING ANGST POP
Demons Are Back (Mortiis remix)
From the full length The Great Corrupter released May 9, 2017
An Omnipresence Productions 2017
Purchase the LP
Purchase the CD
Purchase the LP/CD (with free digital download)
Purchase the digital download
Purchase it on digital, LP & CD format
Demons Are Back is more of what we have come to expect from this band from Oslo, Norway with the driving industrial and techonancing and lyrics that match including some very nice demonic screeching! Sins of Mine is not at all what we would except from this band as the song is very easy on the ears and reminds me of a song that perhaps the late David Bowie would have done back in the early 1990’s.
Mortiis has come a very long way since the early 1990’s as a bassist for Emperor. Together with front man Havard Ellefsen, Chris Kling, Ogee and Levi Gawron, they are defiantly well rounded, seasoned and oozing with sex appeal, stage presence and just that little bit of permission to let the listener feel a little out of control!
The lyrics to Demons Are Back and Sins of Mine kind of intermix talking about all those sins we commit on a daily basis, some we are and are not aware of, that we all must pay the price for daily and how we all try to make different choices to in essence to keep those demons at bay. It also addresses that at some point we all reach a point in our lives that we are faced with choices that no matter which one we choose we know there is no good outcome and in a sense we sort of become just little bit more numb to what we must do to survive.
I do have to say however though I appreciate theatrics and or the use of make up for members in a band; I was not amused to see that one of the band members was wearing a similar design to former KISS member Ace Frehley.
Over all, I would rate Sins of Mine with 3 skulls and Demons Are Back with 5 skulls. Def worth the purchase! -Roberta Jean Downing