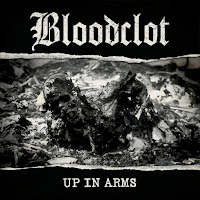 BLOODCLOT
Kali
From their 2017 full length Up In Arms
Order the album at Metal Blade Records
Kali is the second promotional video promoting Bloodclot’s current CD Up In Arms. The first video of the title track was reviewed here last December. In that review I stated how relevant eighties hardcore remains today. Now as then, “the ruling class destroys the planet and kills millions for profit” according to vocalist John Joseph (Cro Mags. Both Worlds). “The formula for our response is simple. Don’t just bitch. Change it.” In another video Joseph cites Henry Rollins as saying hardcore was special because the bands were accessible to the fans and not above them. I remember going to CBGB, L’Amour and Right Track Inn and seeing bands and fans on equal footing. The prevailing mood was down to earth and antistar. This gives you an understanding of the “fuck you” position of the scene regarding rock star attitudes. Anyway, the one to two minute bursts of energy and conviction in Joseph’s vocals reflect that classic attitude. His energy and diction easily matches the Cro Mags’ Age Of Quarrel which people still listen to as if it came out last month. Todd Youth, a guitarist you’ll remember from Warzone, Murphy’s Law and later Danzig, reportedly wanted to record Up In Arms for a long time. He had composed songs and Joseph had lyrics written in notebooks. Recording a demo in the early fall of 2015, their collaboration led to the album’s release which they feel is a positive development meant to happen. With bassist Nick Olveri and drummer Joey Castillo (Queens of the Stone Age), Bloodclot generates songs that developed naturally and unforced, the results of four like-minded band members with the same social issues and the same goals at heart. Produced by Zeuss (Hatebreed, Revocation) in Los Angeles, the CD and new video reflects their combined vision, and Metal Blade is raving on how well the material is executed. One listen to the controlled energy of Kali is more than enough to make you want to hear more, especially if you like classic Cro Mags, Bad Brains, Minor Threat, Agnostic Front, D.R.I. and SS Decontrol. Bloodclot will be touring in July and August to support Up In Arms with Negative Approach; tour information is at their page at Metal Blade. -Dave Wolff