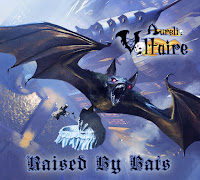 AURELIO VOLTAIRE
Raised By Bats
Independent
Available at Cdbaby.com and iTunes
Having recorded and toured independently since The Devil’s Bris in 1998, Aurelio Voltaire and the term “renaissance man” are often spoken in the same breath; so says the bio on his official website. I can see where it fits since he told StarVox Zine he named his on stage persona after an author who “saw through the hypocrisies of humanity and commented on them through satire.” When I acquired a copy it wasn’t quite like anything I’d heard previously. I had already branched out with Loreena McKennitt and Serpentine Arborvitae who drew on themes untouched on at the time. Aurelio Voltaire similarly took untrodden paths to record something rare and singular. I have followed his recording career on and off from his debut album and each recording distinctly contrasted the last. It also seemed he searched for older, more hidden sources of inspiration. Primarily a goth/dark wave musician, he has drawn influence from European folk, gypsy and dark cabaret themes besides more contemporary themes like country music and parodies of science fiction and fantasy (Star Trek, Star Wars). Aurelio Voltaire is also an author, filmmaker, comic series publisher, toy designer and most recently host of the Youtube web series Gothic Homemaking; the information can be found at his site with detailed bios on each of his full lengths. His 2014 effort Raised By Bats is one of his most progressive and accessible. This album is special to him, combining genres he grew up with including goth rock, death rock, new wave, New Romantic, dark wave and dark folk. He states some of the songs were composed as early as 1984, and all these make Raised By Bats the album he has always wanted to record. Backed by name musicians like Ray Toro (My Chemical Romance), Craig Adams (The Mission, The Sisters Of Mercy), Melora Creager (Rasputina), Polish singer-songwriter Julia Marcell and Ego Likeness, it’s one of his most ambitious for the guests brought in to work on it with him. Bear in mind that A.V. has built all this from the ground up, developing his various talents exclusive of expensive record deals and over the top hype. Not only does the music make it special but the lyrics are the most personal and inner-directed he has written, namely the title song, The Masquerade, Sacrifice, Wake Up (From This Horrible Dream) and Captains All his tribute to punks-turned-new-romantics Adam and the Ants. There is furthermore The Conqueror Worm for you readers of Edgar Allan Poe. Due to the deep nature of A.V.’s verses I’ll post the album’s Youtube stream where you can read them, as opposed to discussing them. But suffice it to say the ode to Adam Ant and his band is the culmination of a long struggle to be oneself despite pressure to do what’s “popular.” I strongly recommend checking this and his previous releases out. They’re well worth it. -Dave Wolff
Track list:
1. Raised by Bats
2. Oh, My Goth!
3. The Night (1988 Deathrock version)
4. The Masquerade
5. The Devil and Mr. Jones (feat. Julia Marcell)
6. Sacrifice
7. The Conqueror Worm
8. Wake Up (From This Horrible Dream) (feat. Chibi)
9. Never
10. Captains All