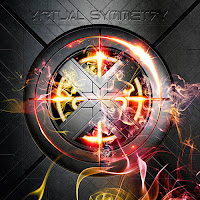 VIRTUAL SYMMETRY
X-Gate
Independent
To be released June 30, 2017
Virtual Symmetry on Facebook
Virtual Symmetry on Youtube
Virtual Symmetry on Twitter
Virtual Symmetry on Instagram
Virtual Symmetry on Metal Archives
X-Gate is the upcoming EP from this Italian progressive metal band, following their 2016 CD Message From Eternity. For a three song release it shows depth, merging the technical complexity of Fates Warning, the surreal atmosphere of Dream Theater, the emotion of Evanescence, the mystery of Queensryche and the theatrical cleverness of Rush. Granted these are ballsy comparisons for musicians that have only been recording for four years, but this sounds like the sort of band that emerges unexpectedly onto the scene generating waves from seemingly out of nowhere. Metalmessage PR says Virtual Symmetry is partly influenced by contemporary music and pop; as far as my own perception this may apply to Marco Pastorino’s vocals but anything contemporary or poppy ends there. The formula here is pure cutting edge experimentation not meant for fans of formulaic pop-punk or verse-chorus-verse pop metal. Virtual Symmetry take the visionary achievements of prodigies like those I refer to and reshuffle them into something that sounds distinct and untested all over again. The dramatic direction these tracks head in call attention to the expectant tension you experience seeing a band perform for the first time, running like a feature film or an ongoing miniseries in which you become intimately familiar with the lead characters. The epic length goes a long way to driving this point home as much as the multiple sections of these songs. There is a substantial sci fi theme connecting them, making science fiction genres of the past and present accessible to the contemporary prog metal fan base. The full scope by which this is depicted on record is breathtaking and should be ventured into at least once. Check out the exchange between Pastorino and guest vocalist Diane Lee in the final track. -Dave Wolff