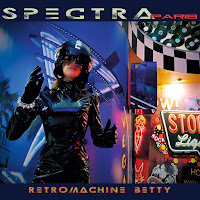 SPECTRA*paris
Retromachine Betty
Dependent Records/Black Sky Europe
Not too long ago I reviewed the first promotional video of Retromachine Betty, raving about how well SPECTRA*paris recaptured the synth pop/wave of the early eighties and the quasi-futuristic birth of music television. It was a short-lived direction for MTV as it lasted for two or three years, but memorable for being pioneering. Whether it was worthwhile depends on personal taste; one band deemed it worth remembering when they got the idea to base a full length on that era. When people hear the term electropop they usually think of bands like Depeche Mode, according to the Bandcamp bio for this recording. The musical route taken here was always less traveled, the bio goes on to say. Presented with a chance to witness SPECTRA*paris reinventing themselves, I’m pleased to join Elena Alice Fossi’s atypical journey into the past and consider the possible futures that could have grown from it. For as long as I’ve been listening to SPECTRA*paris and Fossi’s other band Kirlian Camera I haven’t heard anything quite like this. It’s like entering a time machine out of Doctor Who and exploring a parallel world where music evolved far differently. The bands cited as having partly influenced this are Visage and Desireless. As I’m streaming Retromachine Betty on Bandcamp I wish the lyrics were available for reading. Fossi’s angelic vocals still make the lyrics easy to hear over the keyboards and electronics. These components feel like settings similar in atmosphere and scope to Blade Runner and Heavy Metal graphic magazines. You see these settings clearly while listening, the smoky city lights and surrounding darkness, the gritty sidewalks and seedy nightclubs you visit for the first time. In its own way it’s strangely comforting if you have an attraction to science fiction noir. In high school I read a lot of science fiction, and for recreation, not for class. This could have as much to do with my appreciation for this album as anything else. Whether the prevailing mood is melancholy or uplifting, the songs are presented with the kind of feeling you wouldn’t expect to experience. The latter songs depict mechanized settings theatrically displayed for the listener. This is a logical progression, yet it still takes you by surprise. The band’s cover of the Kinks’ You Really Got Me is worth checking out alone; I’m wondering if a video will be filmed for it. Either way Retromachine Betty is highly recommended. -Dave Wolff