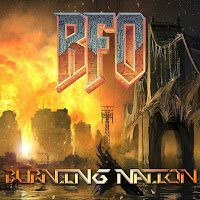 REQUIEM FOR OBLIVION
Burning Nation
Independent
Requiem For Oblivion official site
Requiem For Oblivion on Facebook
Requiem For Oblivion on Myspace
Requiem For Oblivion on Bandcamp
Requiem For Oblivion on Soundcloud
Requiem For Oblivion on Reverbnation
Requiem For Oblivion on Youtube
Released June 19 of this year, Burning Nation is the second full length from Requiem For Oblivion, the follow up to 2014’s Dark Tales of Forgotten Mindscapes. The Pennsylvania band formed in 2007, released a six song demo in 2010 (Funeral For Futility) and between 2011 and 2013 released two EPs. On Bandcamp RFO describe their music as “progressive extreme metal” but this term doesn’t mean they are taking extreme metal in a direction similar to prog bands like Dream Theater. Perhaps this would be too predictable a choice in the band’s view, as their approach is far more imaginative and you wouldn’t expect them to add what they include in their songwriting. What first strikes your mind is their fusion of death metal, doom metal and stoner rock in Fuckisil. Making this fusion work by combining blast with slower, doomier percussion and guitar harmonies, RFO continues in directions that become increasingly bizarre from there. The following track Shards of Glass is built on old grindcore in the vein of Carcass on their classic Reek Of Putrefaction, treating the listener to more death-doom metal with inventive fretboard work and harmonies almost too strange to describe. The more I listened to these songs the more outlandish and unusual I found them. The time changes are not what you expect from death metal, the solos gloomy, atmospheric and macabre, the production raw, the throaty death metal vocals more monstrous than usual… it sounds as if many hours of writing, composing, arranging and practicing were channeled into the making of this album. If you want more examples, there are the Voiviod/Pink Floyd elements, Joey DeMaio (Manowar) reminiscent bass and electronic effects in Death Legion, the transitions from brutal to somber and back again in the title cut, the goregrind and flamenco bass of The Alpha, The Omega, the jazz elements of I Am Myth and finally the atmosphere and grunge (!) elements of Disguised. You get something different in each song, from a band that truly thinks outside the box to deliver a singularly pivotal listening experience. -Dave Wolff