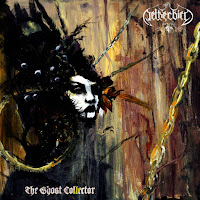 NETHERBIRD
The Ghost Collector
Black Lodge Records
Netherbird official site
Netherbird on Facebook
Netherbird on Youtube
Netherbird on Twitter
This May 5, 2017 re-release is one album worth listening to and adding to any collection. The album originally released in 2008 was their first, and one that earned the band recognition. Two more albums followed. I really like this because of all of the range involved. There are multiple guitars, which I like a lot. It has a bit of a gothic sound, which on some tracks is intoxicating to my soul. For example, Forever Mournful, it is melodic, there are screams and growls, and it is just deep and emotional. Some tracks remind me of the vocal workings of Dani Filth, which I am a fan of. Netherbird calls the town of Stockholm home. They are a Swedish melodic/black/death/metal band deeply rooted in old Scandinavian metal underground. Nephente-vocals, Bizmark-guitars, Nord-guitars and vocals, Tobias Jakobsson-lead guitar, Micke Andre-bass and vocals, and Fredrik Andersson-drums. This is one I will definitely be listening to more of. -Deanna Revis