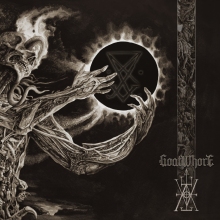 GOATWHORE
Vengeful Ascension
To be released on Metal Blade on June 23, 2017
Goatwhore on Facebook
Goatwhore on Twitter
Goatwhore on Youtube
Earsplit PR had a lot to say about Goatwhore’s upcoming full length. Vengeful Ascension is the New Orleans band’s seventh recording and their first working with a new producer after working with Erik Rutan of Hate Eternal fame over the course of four albums. The production duties are handled with Jarrett Pritchard who has produced for 1349 and Gruesome. While the band value their time spent with Rutan they wanted to experiment while capturing their live essence. Since Pritchard has been their live soundman he seemed to be the logical choice. Vengeful Ascension is the second time Goatwhore has recorded with reel to reel equipment instead of the new technology bands record with. The results are satisfying for extreme metallers remaining in touch with the glorious ninetles since these tracks have an acrid, trenchant sound similar to past efforts and those of Witchery and The Crown, with a touch of atmosphere added. It won’t take long to convince you this is the most appropriate way to develop an album sound-wise when you’re in a band like this, if for any reason to keep your edge without sounding too palatable for listeners ill-equipped to handle your brutality. Don’t take my word for it; this album speaks for itself in that regard. Vocalist Louis B. Falgoust II feels it’s an accurate representation of the band’s history since their 2000 debut The Eclipse of Ages into Black, and all of the band have a sense of where Vengeful Ascension was supposed to be headed. All that was missing from Earsplit’s bio were the lyrics, but the band clarify their position applying Luciferian imagery to everyday life. Portraying Lucifer not as arch-villain but a spirit of guidance and liberation, Goatwhore present him as the archetype for justice. This is the root idea of the songs on Vengeful Ascension as in their own way they depict a rebellious spirit climbing to salvation against seemingly insurmountable opposition. Being that the band originated in New Orleans it seems natural they would take such a position. Vengeful Ascension will be available in several formats including a digipak format and a limited “spellbook” edition featuring two CDs, besides a few colored vinyl formats. Contact Earsplit or Metal Blade to learn more. -Dave Wolff

Track list:
1. Forsaken
2. Under The Flesh, Into The Soul
3. Vengeful Ascension
4. Chaos Arcane
5. Where The Sun Is Silent
6. Drowned In Grim Rebirth
7. Abandon Indoctrination
8. Mankind Will Have No Mercy
9. Decayed Omen Reborn
10. Those Who Denied God's Will