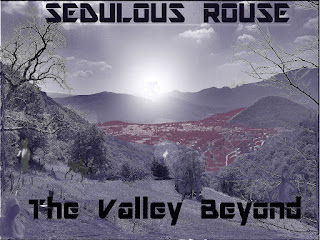 SEDULOUS ROUSE
The Valley Beyond
Indpendent
It has been four years since Adelaide, Australia’s Sedulous Rouse released any material. Their first full length Seasons Of Triumph came out in April 2013 and was an exercise in redefining thrash in its own way. You can read a review here. Released independently by the band last December, recorded, mixed and mastered by Andy Kite at Against The Grain Studios in Adelaide. The Valley Beyond takes the experimental aspects of their debut recording and stretches them to whipcord. If you’re not familiar with Sedulous Rouse, a first impression of The Valley Beyond might be the crunch of Metallica fused with the adroitness of Megadeth, but if you’ve listened to them before there is much more to it. One difference from their debut is the despondent mood brought into many compositions on this album. I’ve always said it takes insight to enhance the inherent beauty in despondency. To quote the 1981 movie Omen III: The Final Conflict, “…the grandeur of melancholy, the divinity of loneliness, the purity of evil, the paradise of pain.” The Valley Beyond clarifies the idea that dispiritedness is tantamount to a genuine desire for something better from life. The title of the album also symbolizes the direction the band take on their own merit. The cover shows a snow-covered landscape with peaks and valleys, stretching on toward a distant mountain range. As the cover of Seasons Of Triumph does, this cover is a wordless representation of what you hear inside. This is apparent from the first cut Brutal By Nature which, in an unexpected move, is an instrumental Sedulous Rouse chose as the album’s introductory track. Writing quieter sections is nothing new for thrash, but on The Valley Beyond they are abnormally imposing and a stark contrast to its thrash aspects. The bass lines add to the rigid guitars and the somber sections with equal ease. Musicianship plays a prominent role here, as important as the lyrics. Examples of this are Enriched By Demons, Blood of the Human Spirit with its intro paying homage to native American culture, Relentless Oppression with its unexpected use of blast and black metal riffs, Robbed Of Solitude with its dissonant riffs, odd bass signatures and bizarre vocals and Killed By Hate with its black and death metal leanings. I just listened to this and I’m already looking forward to hearing what the band does on their next album. -Dave Wolff

Track list:
1. Brutal by Nature
2. For Crimes Unpunished
3. Enriched by Demons
4. The Day We Disappeared
5. Blood of the Human Spirit
6. Relentless Oppression
7. The Valley Beyond
8. Robbed of Solitude
9. Leviticus (Part 1)
10. Killed by Hate
Posted by Dave Wolff at 9:52 PM