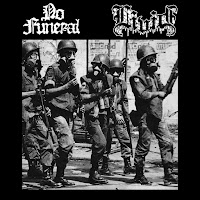 NO FUNERAL/LIVID
Split LP
Live Fast Die Recordings
I unexpectedly got wind of this split full length through an email from Live Fast Die Recordings, a U.S. label dealing strictly with doom metal, sludge metal, crust punk and experimental noise. The bands who contributed songs, No Funeral and Livid, were chosen to represent the doom and sludge metal scenes in Minneapolis, Minnesota. Just last year No Funeral released their full length Misantrope in digital format, this is available for streaming and purchase at Bandcamp. It was likewise released on two cassette pressings of 100 copies each and a small CD run. Livid’s debut album Beneath This Shroud, The Earth Erodes came out this month through Prosthetic Records, likewise in digital format, CD, vinyl and streaming on Bandcamp. Live Fast Die Recordings was founded last year and at their outset are distributing full length and demo releases from NF and a full length release by another Minneapolis band, Circadian Ritual. These are the first Minneapolis bands I am hearing about of late, and this far two of them are a fitting introduction. I became acquainted to sludge metal listening to Carnivore’s classic LP Retaliation and a few years later listening to Winter the first sludge metal band from Long Island who formed at a time when sludge was barely heard of and has zero popularity locally. Nevertheless I gravitated toward them for being in direct opposition to the easy route to popularity, depicting the apocalyptic and post-apocalyptic in a way that had not been tried. My first impression of No Funeral was much like hearing Winter for the first time. The distortion and feedback laden intro to their song Disease Brought By Depression for example gave me a clear vision of a devastated wasteland with nothing as far as the eye could see except for ruins, ruins and more ruins. If after all this time I could have my imagination sparked by a band I didn’t know about a month ago this was a release worth the time and effort to track down. As the feedback and distortion goes into grimy guitars, heavily distorted bass, piercing drum hits and tortured, rasping vocals it becomes self-evident this is no band for the faint hearted or listeners ill equipped to withstand the agonizingly slow dirges. This cut is a visit to deep depression it may be difficult to recover from. Backing up to the first No Funeral song, Infection, it begins with isolated notes I’d expect from a good black metal or DSBM album. To discover this is the foundation of the entire track was a profound moment. No Funeral is in no way an uninspired Black Sabbath clone; while paying homage to the Sabs they revitalize doom and sludge so well you have to hear it to believe it. Livid’s contribution to this split goes even farther to prove sludge metal’s continued validity. False Hope is an eighteen-minute journey into the innermost cosmos of solitude, emptiness and despair, played with a little more melody and an atmosphere that surrounds the vocals as well as the guitar, bass and drums. It’s a song with repetitive note progressions, but this doesn’t become too tedious as they’re designed to enhance the deep emotions presented. These bands are pure underground with no effort made to become palatable for mainstream consumption. And this split is not a bad start if you want to know more about doom and sludge from Minneapolis. -Dave Wolff