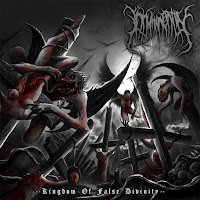 INHUMAN ENTITY
Kingdom Of False Divinity
Rotten Music
This four song EP is the first ever release by Chile’s Inhuman Entity, not counting the advance single for Imposing Inhuman Aberration. Inhuman Entity formed last year and wasted little time composing four brutish songs for Kingdom Of False Divinity. The single for the track mentioned earlier was released last March, two months prior to the EP’s official release. The Bandcamp stream of Kingdom was passed to me by vocalist Raul E. Gonzalez, who is also a graphic designer running an independent company specializing in artwork and logos for extreme metal bands (Raul EGH Artworks & Logos). He is joined by Gonzalo Sanchez (who is also the guitarist/vocalist of the Chilean slam/gore grind band Carniceria Grotesca) and drummer Manu Acevedo (of the Chilean slam/brutal death metal band Hail Caligula). At the time of Kingdom’s release they haven’t hired a working bassist; you’d have to write to ask if the position is still open. As crushing as this is I can imagine how crushing Inhuman Entity would sound performing as a full working unit. The lack of bass admittedly hinders the impact Kingdom Of False Divinity could have, and it’s mostly for Sanchez to carry the songwriting and put the brutality factor across. To be fair Inhuman Entity isn’t the first to record under similar circumstances, and many bands have pulled off the task presenting the material as is. Sanchez’s riff progressions dominate the songs as the lineup seems to have given him reign to write as much as he wanted. He plays with a deep, dark, malevolent sound somewhat likened to Morbid Angel’s Altars Of Madness, only with more distortion. Sanchez helps construct a decent sound as EPs go, and Acevedo’s precise, impossibly quick blast is an important factor in reinforcing his work. Gonzalez’s vocals often head into gore grind territory, utilizing a few different styles when it’s called for. Some of Sanchez’s riffs likewise venture into goregrind territory, which helps give Crucified And Eviscerated and Neron that certain sense of sickness goregrind is known for (think of early Carcass). The lyrics generally range from sacrilegious to pictorially disgusting, as if they’re testing both approaches to lyric writing. In retrospect Kingdom Of False Divinity is a promising start to the band’s recording career. -Dave Wolff