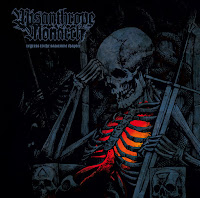 MISANTHROPE MONARCH
Regress To The Saturnine Chapter
Independent
Misanthrope Monarch official site
Misanthrope Monarch on Facebook
Misanthrope Monarch on Bandcamp
Misanthrope Monarch on Youtube
When I reviewed this German death metal band’s self-titled debut EP in 2015 I was so taken with their shredding brutality I wanted to hear more. It took Misanthrope Monarch three years to release a follow up, but as they say it was worth the wait. Two songs appearing on the EP (Crushing The Unbeliever and Father Sin And The Hollow Spirit) were re-recorded for their debut full length along with nine new compositions. Released July 7, Regress To The Saturnine Chapter is already receiving massive amounts of praise from fanzines and the band is being lauded for displaying technical precision without overplaying it, or using too much atmosphere, or relying on too much old school influence. This CD speaks of a deliberate, calculated songwriting process designed to hit home with relative simplicity not requiring too many notes written into a guitar progression. An analogy I thought of is a small guerilla force in the midst of a zombie apocalypse taking out one lumbering reanimated corpse at a time, with a single head shot. Just the proper amount of firepower here. Regress To The Saturnine Chapter is a death metal album that doesn’t try too hard to be a death metal album. You can tell this band is different from their name alone, as Misanthrope Monarch is not your typical band name. I found this formula is far more effective in the long haul than giving the listener too much to absorb too early. Winter, Mortician and Dark Throne based their songs on minimalism and the “less is more” approach and it established their longevity while leaving more room to progress and grow. Misanthrope Monarch are not as simplistic as those bands but they do place writing good songs and not songs that are too technical. The production speaks of the same approach on the band’s part and the result is a recording that shreds your brain like a scapel rather than a sledgehammer. These songs are extremely direct and fan feedback on Bandcamp says it’s “death metal as it was meant to be... uncompromising… a perfect blend of… speed and midtempo.” Even the intro doesn’t overstay its welcome. Without effort the band even recap elements of classic thrash arranged within the song structure. I notice a balance between thrash energy and death metal brutality more accurate than other bands have attempted. The guitar solos carry hints of classic metal. One Youtube reviewer likened them to Kirk Hammett but I’d go as far as to cite Iron Maiden. The lead vocals are imposing with sufficient diction to avoid sounding like unintelligible growling. If thinking man’s extreme metal is your speed you should give Regress To The Saturnine Chapter a listen. -Dave Wolff

Track list:
1. Towards The Utopian Kingdom Of Fire
2. Usurping The Throne
3. Crushing The Unbeliever
4. The Brotherhood Of Destruction
5. Dispelled
6. Regress To The Saturnine Chapter
7. Father Sin And The Hollow Spirit
8. Black Sirens Lurking
9. The Omega Embrace
10. Trail Of The Heretic (Maleficium)
11. Cosmic Maze
Posted by Dave Wolff at 7:25 AM