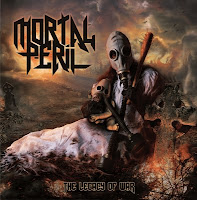 MORTAL PERIL
The Legacy Of War
Independent
The German thrashers Mortal Peril, based in the city of North Rhine-Westphalia, have been active since 2010, during which time they released the EP Of Black Days and Cruel Alliances (2012) and the full length albums Walking On Hellish Trails (2015) and The Legacy Of War (2016) besides making an appearance on the Metalmessage VI compilation (2015) with Senor Wampo (a track taken from Walking On Hellish Trails). Mortal Peril have gotten rave reviews for drawing from the classic thrash era; here they display the crunch of Exodus and Sacred Reich with the proficiency of Destruction and Death Angel and hints of hardcore and power metal. The Legacy Of War, while retaining a certain amount of their traditional rawness, generally struck me as cleaner and more subdued in comparison to their previous releases, and at first it sounded average. However there are several moments where they hook you with catchy song structure, honest lyrics and a sense of avidity in the vocals that has lasted since Of Black Days and Cruel Alliances. Here the band is apparently endeavoring to push their upgrowth by showcasing their songs in more of a polished format, though I felt they would have carried more weight with production similar to their past efforts. Again this doesn’t reflect on the band’s songwriting or capacity to write as Generation Hate, Psychotic, Air Attack (When Death Flies Silent), War Is Hell, Creeping Apocalypse and Machete illustrates. I read in Damnation Magazine that the band recorded The Legacy Of War with the analog tape method rather than record it digitally; when I consider this it does give the material its organic sound rather than coming across as too polished, For this Mortal Peril get additional kudos for making a decision they felt was right for them and what they thought would best do their material justice. The band has a Youtube profile with a promotional video for Inglorious Bastards (also from Walking On Hellish Trails) and several live clips including Air Attack and a cover of Cro Mags’ Hard Times. -Dave Wolff