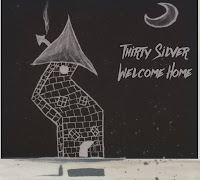 THIRTY SILVER
Welcome Home
Recorded with Dave Sage at the Puzzle Basement in Charlestown, MA.
Mixed and mastered by Dan Bee at Bee Sounds, Iowa City, IA.
Thirty Silver official site
Thirty Silver on Bandcamp
Thirty Silver on Facebook
Thirty Silver on Youtube
Thirty Silver on Twitter
Having formed in 2014 and released a series of full lengths, EPs and singles, Boston, Massachusetts’ Thirty Silver released their seventh effort Welcome Home last month, which I was informed is their last as they are officially disbanded. They played their final performance in Manchester, New Hampshire on June 25 before calling it a day. Guitarist/vocalist Drew Smith is already working on a new blues/punk project and drummer Joe Z. is continuing in the Massachusetts horror punk band Negans. You may have read about Thirty Silver when Abyss Forgottentomb reviewed their two song sampler from 2015. She made a memorable analogy for it likening those songs to Tool meeting Angus Scrimm in Phantasm. She was impressed with Smith for the powerful emotion he channeled. On Welcome Home he still sounds similar to Tool’s frontman. I’d take this further and say he has twice the belligerence and brooding of Maynard James Keenan. One should in order to accommodate the musicianship. This is concurrent to Soundgarden and Sonic Youth, before grunge became radio friendly and lost the potential that broke it through. Unlike Tool the songs are less murky, more distorted, raunchy and unsightly. That there is no bass in this mix makes the material sound more garage than usual. From the beginning it has been Smith and Z. and to my knowledge they never hired a bassist. Whether or not this was a good move is for the listener to decide, and there are some moments on this album when a bass would have enhanced the material. The last song Welcome Home is a case in point. Smith sings hypnotically when it’s called for and raises his voice when appropriate. The guitars here are notably sloppy, but I think this is intended to establish Welcome Home as no third-rate pop punk. The lyrical images of black angels, devils, riding through darkness, isolated longing, hangmen and holy dust further separate the band from what college radio deems safe for the masses. In the album’s final track mentioned just above there is a feeling of going home after an endless journey, a fitting theme to close the CD with especially when you arrive at the very end. -Dave Wolff