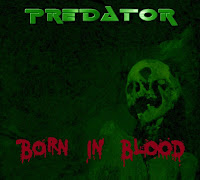 PREDATOR
Born In Blood
God Of Thunder Records
Available at Amazon
As indicated from Damien Lee Thorr’s interview last March, Predator was formed as an alternative to what he perceived as overdone satanic themes in underground metal. Seeing it as mostly a gimmick for shock value since Black Sabbath in the ‘70s. he says Predator was intended from the start to have a reality based outlook. Openly atheist despite their manager’s advice, Damien addresses religion and its present governmental role and push for the separation of church and state. One point of his I relate to is religion is brought into schools to discourage teaching about evolution: a form of controlling young students under religious guises (another example of using religion through legislation is the PMRC and the attacks they launched on metal and music in general). Predator don’t whitewash their views on religion as a means of control; there is more to read if you missed the interview’s first posting. The band formed in Florida in 2007 releasing a self-titled debut in 2009 and Born In Blood in 2011. If you like Iron Maiden, Armored Saint, Agent Steel, Candlemass, Riot and Krokus you should check this out as Predator take a straightforward approach to playing with the same functioning liveliness bands had in the 80s. Listening to Born In Blood is like discovering the classic era all over again, and you often hear classical guitars reminding you of Randy Rhoads’ playing on Ozzy Osbourne’s debut outing. While those bands (with the exception of Ozzy) use lyrical themes relating to horror, fantasy and the occult Predator write Slave, Days Without Rain, Born In Blood and Far Beyond Death which place belief in oneself over blind faith. But unlike early death metal in which the lyrics were written to reciprocate threats of eternal damnation Predator take a neutral approach and allow the listener to decide the weight of their message. There is another song here called Ingrid Betancourt based on the true story of a Colombian activist who was captured and held prisoner for seven years. Back to the musical aspects of the band, Thorr and Victor Meneses’ frequent dual guitar solos are similar to Dave Murray and Adrian Smith; which helps define Predator’s sound as much as the classical guitars. Vocalist Nestor Aguirre has a fitting voice for the material, hitting high notes as John Cyris (Agent Steel) and Joey Belladonna (Anthrax) did in their prime. Bassist Scott Opiela and drummer Ed Greseley form a solid anchor as the band’s rhythm section. The final mix of Born In Blood could have used improvement production-wise but the material is strong enough to shine through it. Predator is preparing to record a live album with a new lineup including Thorr, Meneses, bassist Mike Heremana, drummer Darrin McNair and vocalist Rick Mythiasin (Pantera, Steel Prophet). Visit Thorr on Facebook for news and updates on the band and visit Damien Guitars for information about his custom guitar work. -Dave Wolff