CD Review: PRAYER OF THE DYING Banished From Death 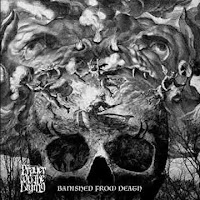 PRAYER OF THE DYING
Banished from Death
Independent
Malta’s Prayer of the Dying is a solo project that Martin Ciappara (also of Black Vulture, Luciferian Blood, Lustre and Sarratum) has helmed solo since 2007’s Structures Of A Dying Matter. Having always been a crossover between death and black metal, this project is one more example of achieving maturity without compromise, building on previous releases while undertaking musical growth. I’ve experienced Ciappara’s growth off and on for as long as I’ve corresponded with him, paying particular attention to full lengths including In Silence and Grief We Decay (2011) and God’s Failed Creation (2013). Over the years the black metal factors emerged to dominate his material, refined to generate grief, sadness, despair, sorrow, brooding and the deepest contemplation. Ciappara relinquishes the blast/hyperspeed associated with extreme metal, bestowing the songs with slower paces in the mode of doom metal. This expands a lot on the pensive and depressive themes Ciappara writes into his material, making it sound closer to Black Sabbath for its emphasis on the guitars as much as the plodding dirges these pieces are built upon. This comes with an additional effect of psychedelic themes reminding you of classic Pink Floyd and later Voivod, and even some Celtic themes appearing occasionally. Black metal purists need not fear as there is still a profusion of biting, abrasive chord progressions and rasping vocals here. The doom and psychedelic designs brought in create a wider theatrical tapestry in which Ciappara can embellish on these influences while avoiding the paint by numbers trap that bands can easily fall into if they try too hard to change. Adjustment of a band’s style can be as limiting as adherence to the same formula, and Ciappara finds a model balance between divergence, underground integrity and honest emotion. -Dave Wolff