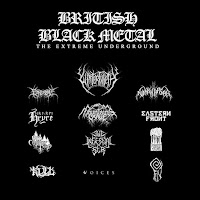 British Black Metal: The Extreme Underground
Company: Tourmaline Films
By Andy Horry in association with Ukem Records
Release Date: Feb 16, 2016
From Motorhead to Venom to Napalm Death to Cradle Of Filth to Akercocke, it’s undeniable how much England has contributed to heavy metal and extreme metal. Of these bands, Napalm Death came from a post-punk scene that would go on to make an impression on thrashers in North and South America who sought to take thrash to the next level. This led to the second wave of death metal that swept the world like a relentless, insurmountable wave, the likes of which would never have been expected. It’s important to remember how it was rooted in a self-sustaining industry that in many ways was deliberately exclusive, made up of radical free thinkers opposed to the government and corporate greed (not to mention the possibility of nuclear war) and not afraid to voice their convictions. A point made at the beginning of Tourmaline Films’ half hour documentary British Black Metal: The Extreme Underground is that English fans had Cradle and could listen to and be inspired by bands from Scandinavia, but they never a black metal scene they could call their own on a similar level to the grindcore scene. Now in the 2010s there is an exclusive English scene in which the bands pay tribute to their heritage and cultural traditions going back to the Victorian era. There are a few differences between this scene and those that emerged from other countries in the early 1990s, and the various controversies that surrounded them at that time. Instead of being fueled by Satanism or dark paganism, many of the new English bands (including Winterfylleth, A Forest of Stars, Old Corpse Road, Fen, Eastern Front and Ethereal) center on spirituality and metaphor, actively applying their traditions, history and folk tales to a modern context. Reflecting on the contemporary social and political state of the United Kingdom, and how religion comes into play when used to rationalize wrongdoing, the scene has a bit more in common with the grindcore scene than Scandinavian. Comparisons are made to My Dying Bride and Paradise Lost, two U.K. bands whose music reflected on depresson and desperation. Individuality is an important theme in this new wave of black metal, besides what the themes cited above mean to each musician and songwriter in the scene. The music is quite decent, it relying on atmosphere along with the aesthetics black metallers are familiar with and occasional death metal guitars. I should add the theatrics are different as not all of the bands wear corpsepaint. The live performances have more in common with traditional metal, through the onstage light shows are not intended to overshadow personal connection with the fans. This is a scene that is striking out to become its own entity rather than emulate those of yesteryear, and it seems there is much headway being made here. See for yourself. -Dave Wolff