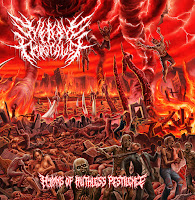 NEKROHOLOCAUST
Hymns Of Ruthless Pestilence
Brutal Mind
Released Date: October 13, 2017
Forming in the Philippines in 2003, Nekroholocaust made many compilation and split appearances on a variety of independent labels, besides releasing a series of demos, singles and live albums in different formats. The band has a completely DIY method of promoting, and have gone from label to label to release and distribute their work, but something about their attitude and work ethic clearly speaks of having their act together and knowing how to operate within a time tested technique that has worked one way or another since the 90s. They know their target audience and are realistically building an international fan base from the grassroots up. Their track record of the labels and bands they’ve collaborated with worldwide speaks for itself. Nekroholocaust seems to have had little difficulty finding like-minded death-thrashers for mutual support; as a first impression Hymns Of Ruthless Pestilence is as relentless as their marketing campaign. Their album is brutal and to the point; at twenty-seven minutes it wastes no time getting its message across. The band give the nine tracks recorded for inclusion on it “slamming brutal death metal” but these tracks have as much in common with 1990s/2000s goregrind as with early Incantation and Internal Bleeding. The guitars and lead vocals are spot-on for goregrind and brutal death metal hitting as many downtuned notes and guttural lows as can be expected from bands like this. If you appreciate guitar-heavy goregrind with deep vocals and imaginatively horrid subject matter you’ll find the appeal in Self-inflicted Genital Mutilation, Excrutiating Savage Butchery, Hideous Atrocities, the title track and Psychopathic Hallucinations Of Morbid Perversities. The bass complements the guitars with the proper volume, adding sufficient bottom. I had only one complaint, that the snare drum could have been tightened a lot more so it didn’t echo as much. This was something that kept distracting me but as before this complaint is minor. The inclusion of Robert Shaw’s Carmina Burana: Fortuna Imperatrix Mundi: O Fortuna as the intro (renamed Glorification Of Barbarity) may have been done before a number of times but it is still stirring as an introduction to a metal album. The cover artwork by Timbul Cahyono of Bvllmetalart perfectly sets the mood for this album, with a combined 80s/90s theme depicting scenes of global Armageddon and eternal damnation. -Dave Wolff