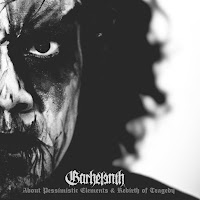 GARHELENTH
About Pessimistic Elements & Rebirth Of Tragedy
Satanath Records/The Eastern Front
Release Date: December 14, 2017
Garhelenth are a band from Iran that plays a very traditional form of black metal and this is a review of their 2017 album "About Pessimistic Elements & Rebirth Of Tragedy" which was released as a joint effort by Satanath Records and The Eastern Front.
Bell sounds start off the album before going into a heavier musical direction along with a brief use of witch laughter before going into a very fast musical direction which also uses a great amount of tremolo picking and blast beats which also gives the songs a more raw feeling along with some dark sounding melodies.
Vocals are mostly grim black metal screams along with a few growls and clean vocals as well as as a brief use of spoken word parts while the songs also bring in a great mixture of slow, mid paced and fast parts along with the solos and leads being done in a very melodic fashion and as the album progresses a brief use of spoken word parts can also be heard.
Garhelenth plays a style of black metal that is very melodic, raw and traditional sounding, the production sounds very dark and heavy while the lyrics cover Occultism, Philosophy, Nature, Hate, Moral, Darkness and History themes.
In my opinion Garhelenth are a very great sounding traditional black metal band and if you are a fan of this musical genre, you should check out this album. RECOMMENDED TRACKS INCLUDE "Destruction Of The Will" "To Impersonal Mankind" and "Perspective Of Exorbitant". 8 out of 10. -Loki Astaroth

Track list:
1. Pessimistically (Abolish The Idols)
2. Destruction Of The Will
3. Foolish Conscience
4. Self-Humiliation
5. To Impersonal Mankind
6. Moral To Pessimist
7. Perspective Of Exorbitant

This review can also be read at Occult Black Metal Zine. -DW