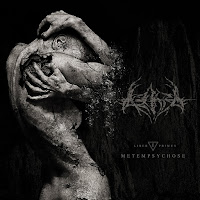 AZZIARD
Metempsychose
Malpermesita Records
Release Date: December 8, 2017
A cold, snow covered Sunday mid-afternoon is an ideal setting for listening to this French black/death metal band. I felt compelled to open the window in front of my desk so I could feel the cold as well as seeing it, to enhance their disposition. The sun is going down as I listen on and it’s starting to get colder, which makes for an atmosphere even more fitting. Azziard has been active since 2001 and released two demos, a split, an EP and three full lengths. The latest of these full lengths Metempsychose was passed along to me by Juliette Morand of Malpermesita Records and Xenocorp. Again I’m a latecomer to a band I’m just hearing of but from listening to a handful of songs I’m already getting impressions of their singular direction and frame of mind. The lineup is comprised of former members of Mind Asylum, The Negation, Bran Barr, Dreamcatcher and Repudiate to name a handful. All the members of this band have sufficient experience they make use of in this band. Their uniqueness comes from musical subtleties adding up to generate a flight of imagination making you uneasy from the outset of the shadowy introduction Premier Jour. The pensive guitars, haunting lead solo and eerie disembodied voices prepare you for the nightmares waiting to jump into your frail human perception. Azziard stirred this in me with their ability to create grisly, hair-raising ambience with minimal effects and no additional instruments outside guitars, bass and drums. No keys, synths or even acoustic instruments. Just an adeptness at getting different sounds out of the instruments at their disposal and a healthy imagination. This approach to black metal reflects their death metal elements without overshadowing them. Again I refer to the intro Premier Jour which makes use of dissonant chords you hear on death metal albums. The precision of the blast beats speaks of the primal brutality of Deicide and Vital Remains. Drummer Anderswo makes the most effort to cross the two subgenres over, and deserves credit for pulling it off considering the hard work required to do so. Just about every song here is a prime example of where Azziard is taking their black/death crossover, but if I had to choose specific songs they would be L'Enfer, L'Anachorète, Dies, Ascension, Le Meurtre du Héros (check out the shrill screams about midway through), Archétype, Psyché and Le Sacrifice. Night has fallen and it’s colder still so I’m going to listen to this album again. -Dave Wolff