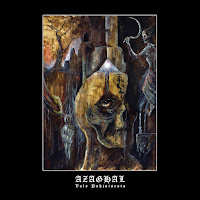 Band: AZAGHAL
Place of origin: Finland
Genre: Black metal
Album: Valo pohjoisesta
Label: Immortal Frost Productions
Availability: CD, digipack and 12″ vinyl formats
Release date: September 24, 2018
Azaghal started out as Belfegor in 1995; in ‘97 they changed their name to avoid being confused with Austria’s Belphegor. The years between 1998 and 2018 saw many full lengths and even more splits. One of the ways by which Azaghal refined their method, according to their Facebook biography was to release colder and more inhuman sounding albums than the last. The band also made a point of infusing more diversity and prolific musicianship to their songs. Both goals are achieved on ‘Valo pohjoisesta,’ their latest album which was released last September. They are after all from a Scandinavian country and by now the rawness, coldness and atmosphere the bands from that area create has long been a demonic lusus natural, with tentacles reaching every part of our terrestrial sphere. The art of composing intros that suggest what is to come is not lost on Azaghal. I often compared intros to gateways into other worlds; the intro here (VLE) is like a piece of an otherworldly plane that somehow managed to manifest itself in our world. There was something about that brief instrumental that persuaded me to listen to ‘Valo pohjoisesta’ more than once, to take in the evil themes penetrating my thoughts. VLE starts with keyboard notes, fiendish voices and other sounds, becoming a menacing prelude with piano, keyboards and percussion. Slowly builds in volume and magnitude, it concludes with a sudden flourish that is followed by a moment of silence. I was sufficiently prepared for Mato Joka Sinut Turmelee, a song that emulates the best of Norwegian and Swedish black metal, adding its own impression of frostiness. It’s like the awakening of an abomination from those vast expanses of snow and ice that threatens to transform the world into a huge glacier. This song and those that come after are played with a fearsome contained forcefulness. There is also an aptness to the musicianship carrying the songs far beyond the bludgeoning of raw black metal. You have to hear the songs (including the title cut, Ruumistie, Sielujen Yössä and Taivaan Käärme Nielee Auringon) firsthand but Azaghal manage to validate the inventiveness of black metal in its own way. ‘Valo pohjoisesta’ is well worth the money spent on it. -Dave Wolff