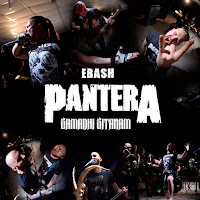 Band: Samadhi Sitaram
Place of origin: Moscow, Russia
Genre: Conceptual metal
Single: Pantera
Label: Independent
Release date: January 1, 2019
Pantera is the first single I’ve heard from Samadhi Sitaram since I reviewed their brilliant full length KaliYuga Babalon, which Sliptrick Records released in 2017. I was forwarded a link to the Youtube stream of this single by Samadhi Sitaram’s manager Iofavn Demonid. When asked for some info about the stream he concisely explained the band’s intent was to write a sincere homage to the late Vinnie Paul and Darrell Abbott of Pantera, and the profound impact the band had on them. Being a Pantera fan I can relate to this simple sentiment, knowing how they became nationally renowned and re-established metal as a force in the mainstream practically overnight, in the middle of grunge’s emergence into the spotlight. This led to Pantera sustaining a cult following long after they disbanded, since it proved encouraging to underground musicians who were discontented with the lack of aboveground recognition, or constant charges that the genre is dead. Being a band that defies categorization (as my review of KaliYuga Babalon indicated) and seek to be recognized and appreciated for it, Samadhi Sitaram express their admiration for a band that was rewarded for going against the grain, and proved there are many people who relate to the genre. Their influences on KaliYuga Babalon range from djent to groovecore to deathcore to mathcore, and they made thorough efforts to arrange them differently. On the Pantera single they make a departure from the direction of that album, sounding closer to the heaviness of Pantera and the tribal rhythm of Sepultura. These themes are instantly recognizable as they’re interpreted in this song, and Samadhi Sitaram play with a primal simplicity that is incessant, hypnotic and infectious. Toward the end they bring in something of an industrial theme, followed by a guitar line with low sliding notes that grows more intense. Samadhi Sitaram’s early January release of Pantera has been generating a buzz on the web so if you’re a Pantera fan do yourself a favor and give it a chance. -Dave Wolff