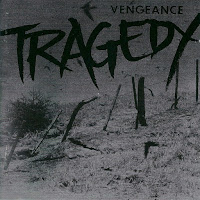 Band: TRAGEDY
Place of origin: Memphis, Tennessee (early), Portland, Oregon (later), USA
Genre: Crust Punk, Sludge/Doom Metal
Full Length: Vengeance
Label: Tragedy Records
Release date: 2002
While scrolling through Youtube, I happened to come upon the release ''Vengeance'' by Tragedy. I was on a punk-rock kick, and had been listening to Gloss, A Global Threat and Limp Wrist. After Limp Wrist, I was linked to this band. I am very glad that I was! Although I cannot pin-point a specific genre, I can hear a few different styles within the mix. I can pick out punk influences, but the depressive tone during the majority of this release reminds me old old-school depressive black metal. Not to say that this is ''black metal,'' but it is dreary in a way that reflects certain aspects of the genre. The vocals are forward and aggressive, filled with obvious emotion. The guitar is heavy (to say the least) and the drums are played on time with a violent force. Clocking in at over thirty eight minutes, this release proves that this band is not only skilled, but they can really rip a mean tune. In places, this band reminds me of modern-era Malignant Tumour. Tragedy has the ability to cater to the needs of music listeners from various different genres. This is how I take it, at least. I don't have much more to say about this except that it was a happy find for me, and I will most likely look further into releases and tracks from this talented musical onslaught. Check it out, share it with your friends, and if you are feeling generous, buy an album! Every little bit counts in the end. Great stuff, Tragedy! -Devin Joseph Meaney