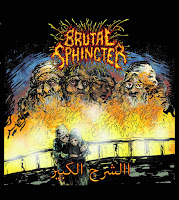 Band: BRUTAL SPHINCTER
Place of origin: Liège, Belgium
Genre: Political goregrind
Full length: Analhu Akbar
Label: Rotten Roll Rex
Release date: August 8, 2018
It is the first of January and I can honestly say I had a great new year. Due to Christmas and other festivities, I did not get a chance to review any music over the holidays. This all changed today, as I have stumbled upon the album ''Analhu Akbar'' by Brutal Sphincter. After a busy day of shoveling white death from my driveway, I can say that I was very happy to relax and listen to this vicious goregrind gem. The first thing I will mention is the production quality. Most of the gore that I listen to is of the low-fi variety, but for Brutal Sphincter this is not the case. The production quality is very high end. There is nothing wrong with low-fi, but with such professional production one cannot help but notice that this release stands out from the herd. The guitar work is bordering on perfection, the drums pounding through in machine-like fashion. As for the vocals, I can honestly say they are some of the best I have heard in recent months. Ranging from pitched gurgles to clean gutturals and ''cricket style'' vocals, a fan of goregrind would never be bored with this release. Although I enjoy every single track on this album, my favorite would be ''Alex Jones the Reptiloid King,'' as the title makes me giggle... a little bit, anyway. If I learned anything from this release, it is that nobody should have gay sex hundreds of times in coffins... begging for spiritual entities to possess them in giant pits of feces. The more you know, right? I will give this release a ten out of ten for pure gore-grinding awesomeness. Just fucking listen to it, mmmkay? -Devin Joseph Meaney