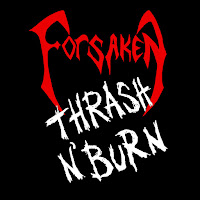 Band: FORSAKEN
Place of origin: Cape Breton, Canada
Genre: Thrash metal
EP: Thrash N' Burn
Label: Independent
Release date: 2003
Dedicated to the memory of Nichole Meaney
As it says in their Bandcamp bio, this album ''was recorded in the Sydney Academy High School music class room in just a few hours over two days in 2003.'' Most of this release was recorded in a one-take fashion or live off the floor, and I must say, for the way it was recorded the album is well done and quite enjoyable to listen to. This band was around for only a brief period. They played a few shows, played a few house parties, and from the few shows I saw them play I can say they did so very well. I was only about thirteen/fourteen years old when these guys were active, and one of my very first local concerts I ever experienced was this band. The only two local events I attended before Forsaken were a few shows featuring the band Face Downe, a punk-rock band from my area featuring a family member of mine. I was introduced to Forsaken in the same way. The lead singer is a cousin of mine and he took me on a few outings with this band. I was at two shows (If I remember correctly) and one rehearsal, at least. I remember being bummed out after the first time I saw them play because there was an after party and I was too young to partake in any of the drinking-fueled festivities. I had school the next morning and was home before any of that happened. I don't remember fully what other bands played that night, but I do remember that Forsaken had pretty much stolen the show. I'm not sure where they are, but somewhere I have a few rehearsal cassettes filled with live tape-deck style recordings of Forsaken. I remember hearing these cassettes before they put out the Thrash N' Burn EP and I was very excited to listen to the final product. It is hard to think that this release is sixteen years old, but every time I listen to it I am reminded of fond memories, and a local band that helped shape my taste in music for years to come. Featuring only five tracks, the Thrash N' Burn EP is still enjoyable today and I suggest that anyone reading this checks it out and gives it a listen for themselves. Thrash is great, but Cape Breton thrash from my teen years will always spike my mood in a positive way. Will these guys ever have a comeback? I really don't know. But I know for sure... if they ever do, I will be there. Forsaken rules. -Devin Joseph Meaney